For the first time in the short history of the Money In The Bank PPV, the big belt will be on the line.

When the belt was on the line in other gimmicked PPVs such as the Royal Rumble in 1992 and Survivor Series in 1998 (though it wasn’t an actual Survivor Series match), it has been a very memorable night.

Our guys have John Cena and Seth Rollins as favorites for both Money In The Belt matches, though, Roman Reigns and Randy Orton have become late favorites to win the match.

On the pre-show kickoff, Daniel Bryan was interviewed by Michael Cole and said he doesn’t know when he will be back as the strength isn’t back in his arm. He said there is a possibility that he might need another surgery.

He said that he had three names of those who he thought were favorites for the match tonight. He said John Cena, Randy Orton, and Roman Reigns. Bo Dallas came out and did his spiel. Bryan said he was acting like a Bo-ner. And then told Bo to Bo-leave the ring.

Let’s get to the Money In The Bank live coverage.

1. The Usos Vs Rowan and Luke Harper

The finish was way overbooked as they lost the crowd a bit. It looked like Rowan and Harper were going to win as they did a version of the Razor’s Edge, but they both lifted up an Uso. I think Jey saved Jimmy. Or whatever. The Usos hit a double super-plex from the top rope. And then both hit big splashes off the top rope on Rowan for the pin.

This is better than the matches Paige has been having with the other women. Naomi is so athletic. She did a dive over the top rope and fell a bit short so Paige had to catch her on her stomach rather than her chest. That looks like it hurt. They botched something on the top rope and both spilled over the top.

Naomi hit her big butt move for a two count. Paige went for a sharp shooter, but Naomi reversed it. Paige then hit a version of a DDT for the win.

Sandow is dressed as Paul Revere.

B. If they want Rose to be anything, being competitive with Sandow is probably not the way.

4. Money In The Bank – Seth Rollins Vs RVD Vs Jack Swagger Vs Dolph Ziggler Vs Kofi Kingston Vs Dean Ambrose

Ambrose immediately went after Rollins and they rolled outside of the ring.

Kingston spot-fest early on, running up the ladder that Swagger was holding, the boom leg drop on Swagger who was laying on the ladder, and then he was on the ladder, Ambrose pushed him off, he used the top ring rope to catapult himself onto the guys outside. That was sick.

RVD put a ladder on top of the bottom rope and in the corner. He played Rollins on the ladder and then did the Rolling Thunder on Rollins onto it. It looked like a very soft landing spot for Seth. He also hit the 5 Star on Swagger.

RVD tried to hit a 5 Star from the top of the ladder, but Seth interrupted him and Swagger powerbombed him off the middle of the ladder.

Ambrose superplexed Rollins from nearly the top of the ladder.

Ambrose was pushed off the ladder and onto Jack Swagger and hit a swinging DDT. They teased a shoulder injury and the ringside officials made him leave the ring. It seems that he’ll be involved in the finish.

Kofi grabbed a ladder, draped it over the top rope and hooked it onto the ladder that was already up. He back dropped Rollins onto the ladder which collapsed, so he took about three bumps in the process. Crazy stuff.

Ambrose came back out with a chair and took Rollins out. He struggled climbing the ladder with one of his arms hurting. Kane came out to stop him. Kane hit a weak choke slam and tombstone and helped Rollins win the match.

This was so damn good.

Triple H and Stephanie came out to congratulate Seth Rollins in winning.

5. Rybaxel Vs Goldust and Stardust

Slow match after the craziness of the previous match. Stardust pinned Ryback after a roll-up.

Big E got a lot more in this match than in the previous one. He hit the most spectacular running spear through the ropes on Rusev after. It was nuts.

Rusev hit the big side kick and then sunk in the Camel Clutch pretty deeply. Big E struggled, but had to tap.

Brie Bella was backstage with her sister and Stephanie kicked her out. She left on her own accord.

Talk about a bathroom break. Fandango was the referee. Layla pinned her and she and Fandango started making out while Summer Rae was crying.

8. Money In The Bank – Sheamus Vs Bray Wyatt Vs Alberto Del Rio Vs Cesaro Vs John Cena Vs Randy Orton Vs Roman Reigns Vs Kane

This is a much different ladder match than the previous one. Much slower and very few high spots.

The ladder was pushed over and hit Orton right on the top of his head. He was cut from it.

Sheamus was climbing up a tall ladder meaning the belts were in their faces when they were half way up. Cesaro pushed another ladder onto one of its rungs and walked on it to catch Sheamus. Reigns picked it up and pushed it back, but it didn’t go down because the ladder that was locked into it stopped it from going down. Cena then pushed it back for some reason.

Reigns speared Kane underneath one of the ladders. Reigns cleaned house on everyone except for Cena and they faced off in the middle of the ring. Orton came in and the path was clear for him to win. Bray Wyatt stopped him. Del Rio stopped Bray. Sheamus stopped Del Rio. Cesaro grabbed Sheamus off the ladder and hit the upper cut. Orton stopped Cesaro and hit the RKO from off the ladder. Cesaro laid out perfectly for him. Reigns caught Orton. Orton was going up the ladder with Kane protecting him, but Cena hit the FU on Kane and then on Orton and climbed up to grab the belts and win the match. 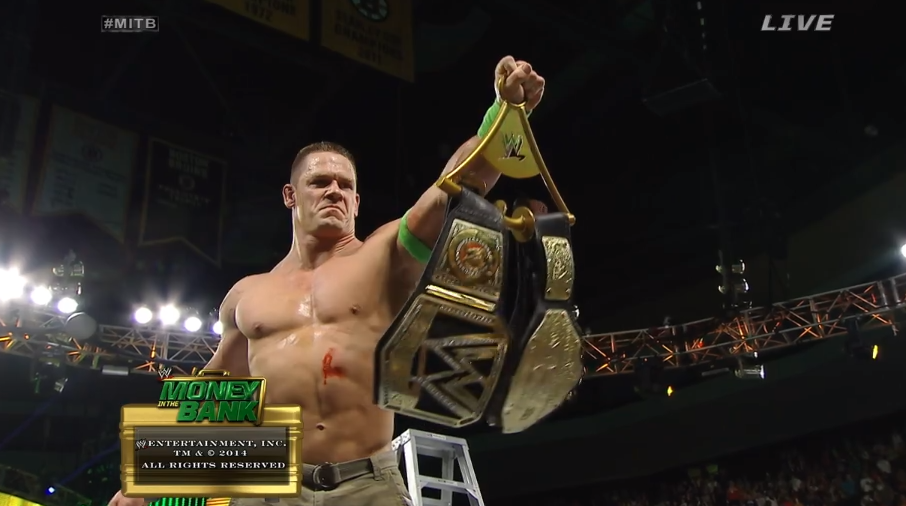