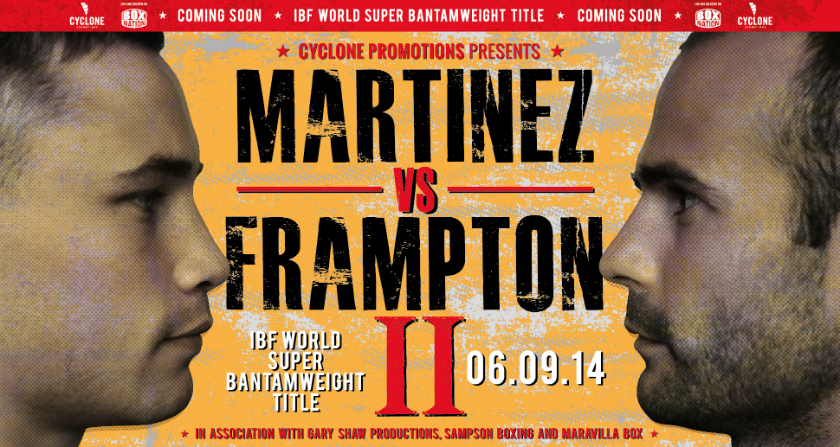 The IBF Super Bantamweight World title will be on the line in Belfast on September 6th.

Cyclone Promotions has announced that Carl Frampton (18-0) will be facing a familiar foe in his first World title bid, as the Belfast based promotional outfit reached a deal to bring IBF champion Kiko Martinez (31-4) back to Northern Ireland for a rematch of their 2013 battle. With Frampton being arguably the division’s biggest attraction, and a title shot heavily rumored for his next fight, there had been much speculation over which opponent and belt the 27-year old would be targeting.

An April victory over Hugo Cázares put Frampton in line to challenge Leo Santa Cruz for the WBC title. Domestic rival Scott Quigg holds the WBA belt – a match-up between he and Frampton is long sought after in Britain. Lineal champion Guillermo Rigondeaux also expressed interest in making the trip to Belfast. It seems however that the Martinez rematch was the fight Team Frampton pursued all along.

It’s here! CarlFrampton will be boxing Kiko Martinez at home for the IBF World Super Bantamweight title and we are delighted! Martinez versus Frampton is one of the most exciting fights out there and what a battle it will be on the 6th of September. Carl has proven time and again that he deserves to be a World champion and now he will get his chance to become one, in the best circumstances possible, without any options on his future and in front of his devoted home fans. Cyclone Promotions have worked tirelessly over the past couple of months to secure this fight and we are overjoyed for Carl. We are in discussions with a number of venues and we will announce the venue of the fight shortly.

It appears that a number of outdoor arenas around Belfast could potentially be in the running to stage the bout, with The Odyssey Arena, home to Frampton’s last four fights, unlikely to be able to sustain the demand for tickets. The Jackal should go into the tie as a favourite having won the pair’s first meeting by 9th round TKO while taking Martinez’s European title in the process.

I’m over the moon to be fighting for a World title in my hometown, I have to thank my team for making this happen and now it is time for me to deliver. I am fully focused on September the 6th and Kiko Martinez. It’s been my dream since I started boxing to become a World champion and I have worked so hard to get this far, now is the time for me to fulfil that dream in front of the best fans in the World.

Martinez has shown the best form of his career since the defeat though. A shock upset of Jhonatan Romero in Atlantic City just six months after being stopped by Frampton earned him his first world title. Martinez largely dominated the bout, eventually halting the Colombian in the 6th. He has gone on to defend it twice since – stopping two experienced former World Champions in Jeffrey Mathebula and Hozumi Hasegawa. He will go into the September 6th bout looking to reverse the most recent defeat on his record.

Since the 9th of February 2013, when I get up at five in the morning to go training, I remember him. For me, to defeat him is a greater motivation than the chance to unify the belts. I will never forget that night and I will prove that it was just a bad day for me. I am World Champion now and my legacy will be bigger for facing Carl Frampton.

The Martinez/Frampton rematch is the first major fight announced for the new season in British Boxing. The Belfast bill will be screened exclusively on BoxNation in the UK and Ireland.