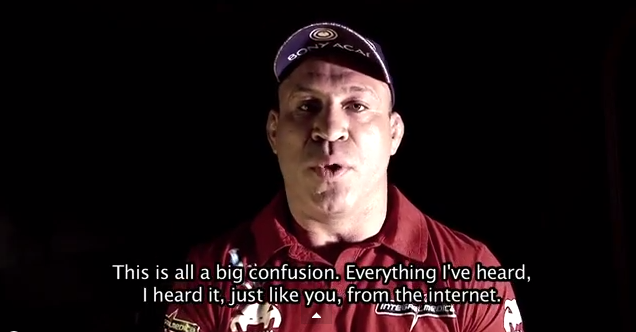 Wanderlei Silva took to YouTube to reach out to fans and give his side of the story, which caused him to be removed from UFC 175. He calls it all a big confusion.

I’m not quite sure what his angle is, but he’s definitely trying to save face with his fans. If he truly wanted to figure this entire thing out, I’m sure he would’ve done so already instead of waiting until he comes back from Brazil, where The Ultimate Fighter Brazil finials are this weekend. I found it funny that he said he hasn’t refused to be licensed in his 20 years of fighting since most of those years were with Pride. And of course, he’d be fine taking any sort of PED tests when he comes back as they wouldn’t be random anymore.

By now, it seems like it’s a lost cause as the UFC has already taken him out of the fight and moved on.

However, Dana White didn’t say that he was out of the UFC. He just said that he was off the UFC 175 card and that he’d let the NSAC handle Wanderlei’s situation.