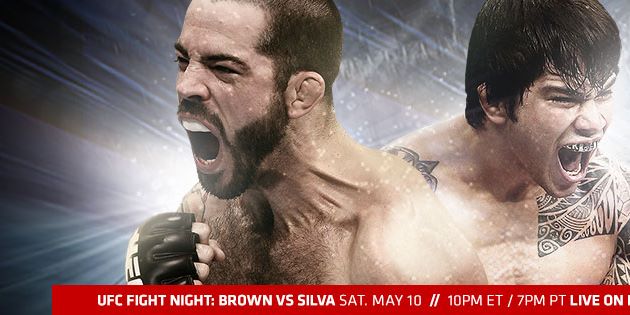 It’s Saturday night UFC, which just feels right. I understand that they like doing cards mid-week because it gives them more options, but for me, the best night is Saturday night.

This card hasn’t been well-promoted at all, but there should be some good action.

First round saw Smolka try to use his size to move Cariaso back against the cage. He tried holding him there and it was a knee to the midsection battle. When Cariaso got off the cage, he looked great with his standup and then locked in a guillotine right at the end of the round that looked dangerous for a split second.

Cariaso is doing a great job trying to finish Smolka with submissions. He put himself in harms way with an arm bar attempt, but again, right at the end of the round, had a tight guillotine. Smolka might’ve been saved by the bell.

Much better round from Smolka. He had Cariaso on his back while in the mount. Also used the cage again to back Cariaso up. Smolka wins the round, but Cariaso wins the fight I think. Cariaso is a tough little dude.

One judge had Smolka up 29-28. The first round was pretty close, so I could see it.

Palelei was on top of Potts and landed an awkward short left hand that rocked Potts and followed up with a few more shots on the chin.

Winner: Soa Palelei by way of 1st round TKO

Magny had a nice takedown and then dropped Means with a punch. He moved in on Means, but instead of trying to drop him striking, went for a takedown. First round for Magny.

Means had Magny on all fours and was kneeing him to the body. But then Magny tried to get up and Means started throwing the knees to the head. Magny quickly got back to all fours and Means looked at the ref as if he forgot what the rules were.

Means is taking the fight over now. He had Magny in a similar situation with knees again and then had a choke locked in for a few seconds. But then, Magny got the takedown and also had Means’ back. Whoever wins the third round wins this fight.

Winner: Daron Cruickshank by way of 1st round TKO

These guys came out winging wide and hard punches. Both guys landed solidly, though Philippou looked to be getting the better of it. His left-hook knocked Larkin up against the cage which made him drop his hands and Philippou landed a straight right to end it.

Winner: Costas Philippou by way of 1st round TKO

Silva threw a body kick that dropped Brown quickly. He held onto Silva so that Silva wouldn’t have the distance to rain punches down on him. He then tried grabbing Silva, but Silva maneuvered him into a neck crank. Brown fought it and it allowed him to rest. Back on their feet, Brown came straight at him with punches, knees, elbows, and two throws. Silva is wobbly with 30 seconds left. Silva has all of a sudden taken a tremendous amount of punishment. Brown’s loading up. Silva went for a Hail Mary spinning backfist but missed badly and Brown took him down again. It’s round of the year.

Brown comes after him like Mike Tyson in 1985. Silva is taking a beating. Silva finally throws back and stops Brown for a second. But Brown comes back. Silva is ready to go. He can barely stand up. Brown threw four lefts in a row; two hooks to the head and two hooks to the body. Silva landed a crazy body shot that slowed Brown down and sent him backwards for a bit. Brown transitioned from using his legs to lock around Silva’s neck, to in full mount and pounding punches, to an arm bar attempt, to a triangle attempt and then both guys exhausted as the round ends. This is nuts.

Hate to see anyone lose this, but Silva isn’t competitive anymore. He’s taking a beating and Brown has made his face a bloody mess. He had him on the ground again and was pounding him with elbows and punches and Silva turned over to take cover and it was finally stopped.