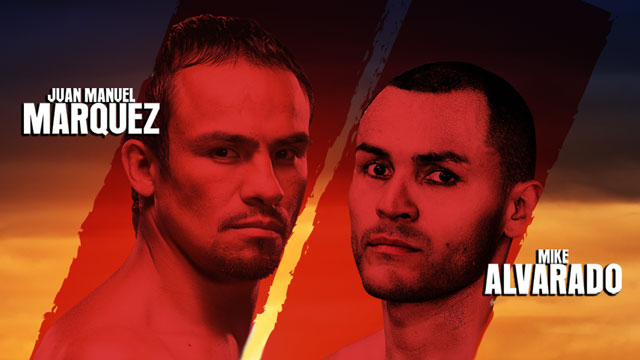 Duan and I gave our breakdown of the fight last night and it really seems like it’s Marquez’s fight to lose. If he gets old over night, that can happen. But if not, he may very well be headed for another Manny Pacquiao fight.

Alvarado wasn’t biting and made Marquez lead the exchanges. Marquez was fine in the role and won the first.

Another fairly easy round for Marquez. He was able to attack the body a lot and also land high. Not sure what Alvarado is doing yet.

Waiting on Alvarado to do something. He’s playing right into Marquez’s hands by not making him uncomfortable at all. Clean sweep so far.

Alvarado started mixing it up late in the round and they started to get at it a bit, but that was after we saw more of the same with Marquez getting off first.

The action got better in the fifth. Alvarado tried to run him down a bit by coming inside, but Marquez was getting off two punches for Alvarado’s one. Good round, but still Marquez.

Marquez makes Alvarado look very slow and methodical. Marquez is fighting in rhythm and Alvarado is fighting like he can’t disrupt that rhythm.

It was another excellent action round. Marquez was brilliant. Every time Alvarado tried to throw an overhand right, Marquez avoided and made him pay, whether it was with short left hooks or another right hand. On the inside, he landed the uppercut well. Alvarado landed as well, but not enough to sustain any sort of offense.

Just as I was about to say that Alvarado was doing better, leading with the left hand and throwing off Marquez’s timing, Marquez throws a jab simply to disguise the overhand right and puts Alvarado on his butt right at the end of the round.

Alvarado clipped Marquez with a right hand in a close exchange and Marquez lost his balance. It turned this into a slugfest. They went toe-to-toe with big shots and while Marquez got the better of most of them, Alvarado wins the round based on the knockdown.

It was back to the earlier rounds where Marquez outboxed him. Alvarado’s left eye is a mess. It’s been that way for the last few rounds.

Marquez needs to be careful. He was knocked off balanced again, though he didn’t go down. The only way he loses this fight is by being sloppy and getting knocked out.

Alvarado’s chance was making this a slugfest again, but he might’ve been too tired. He tried to mix it up at the end, but Marquez takes every round except for the one he was knocked down in.

The fight was a good fight, though not as active as I thought it would be. But Marquez looked good. Get ready for Pacquiao again.