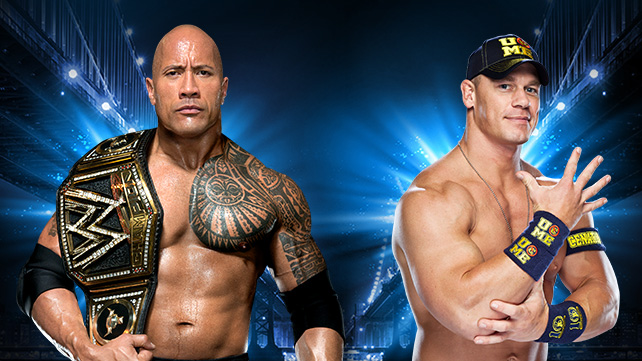 After beating John Cena at WrestleMania 28 in their “Once In A Lifetime” match, it was fairly clear that they were going to have a rematch. Why? Well, John Cena, the person who was sticking around all year lost to a guy who had wrestled two matches in eight years. They took an interesting route to the rematch, having Rock beat CM Punk at Royal Rumble and then again at Elimination Chamber to walk into WrestleMania 29 as the WWE champion.

Cena got there by winning the Royal Rumble match and choosing to face either Rock or CM Punk based on who won at Elimination Chamber. Since Punk lost, he felt like he should get a shot to get back in the match and challenged Cena for his spot. Of course, because Cena is a nice guy (but not too smart sometimes), he accepted and won the match on Raw. Punk wouldn’t be left completely in the dark as he’d win a four-way to earn a shot at the Undertaker’s streak.

Cena and Rock was a slight disappointment in that the entire story was that each guy continually kicked out of each other’s finish. Rock would go on to tear muscles around his pelvis in the match. Cena finally won with what seemed like his 100th AA.

In another slight bit of disappointment, Triple H beat Brock Lesnar in a match that probably hurt more than it helped long term. Since coming back to the WWE after his historical UFC career, Lesnar was just 1-1, losing to John Cena at Extreme Rules and beating Triple H at SummerSlam. There was no real reason to see them face-off again. This time, Triple H put his career on the line and beat Lesnar to send the real fighter to a 1-2 record in his time back.

The Shield faced Randy Orton, Sheamus, and the Big Show (who were seemingly just thrown together) and beat them to start the show. It was a great win for the young team. In a battle of the big men, Mark Henry beat Ryback after he came crashing down on him. Team Hell No beat Dolph Ziggler and Big E Langston in a fun match, but it was only 6 minutes long which hurt the storytelling.

Chris Jericho’s most recent return was great because of his Royal Rumble appearance which showed that he hadn’t lost a thing. But his WrestleMania appearance was disappointing more so because of who he faced and how insignificant the match was. It was Fandango’s debut and he won by roll up. I’m sure it wasn’t what Jericho had in mind for his comeback, but he tried to make the best of it.

In the World title match, Alberto Del Rio faced Jack Swagger who was the number one contender after winning the Elimination Chamber. It was yet another slightly disappointing match. They didn’t get much time at all and after trying to hit the restart button on Jack Swagger, he wasn’t able to get over enough, though Del Rio as the World champion was struggling as well. Del Rio would win with his arm bar.

While WrestleMania 29 was slightly disappointing, the Hall of Fame ceremony the day before (which is on the DVD) was probably the best ceremony of them all.

Trish Stratus’ well-rehearsed speech culminated in her announcing her pregnancy. Mick Foley went on a bit too long, but used his great sense of humor and ability to tell stories to be very entertaining. Booker T doesn’t age and had a great underdog story. And of course, the headliner Bruno Sammartino gave the classiest speech ever.

Bob Backlund’s speech was weird and over the top (and Vince McMahon had to give him the hook) and Maria Menunos’ introduction tried to play him off as Chuck Norris. Donald Trump’s speech was funny and he understood his role and didn’t go on too long.