Raw was part tribute show for the Ultimate Warrior and part extension of the beginnings of the the reformation of Evolution.

The show started with the entire roster on the stage as production played a video package for Warrior before a 10-bell salute.

Throughout the show were snippets of his career, but nothing like tribute shows in the past. It was very much a regular Raw otherwise. 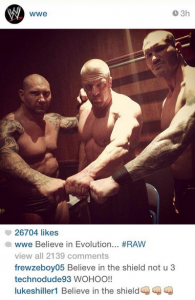 Stephanie McMahon tried to get Evolution back together, but Batista and Randy Orton weren’t feeling it. Triple H said the problem was The Shield. They disagreed and said that was Triple H’s problem.

Stephanie also browbeat Kane and tried to turn him back into the Big Red Machine. Daniel Bryan had the night off as he was on his honeymoon with Brie Bella. Kane said he would send Bryan to the depths of hell. Kane vs. Bryan will main event Raw next week.

Triple H and Stephanie told Brad Maddox to alert the Shield to be ready for the main event, but not to tell them who their opponent was.

It was the Shield against 11 random heels as the main event which meant the Shield would get jumped until they would clear the ring, but eventually, the 11 overcame them. And when all three members were out, Evolution came out. Sadly, the Nature Boy was nowhere to be found. They continued the beat down and saved Roman Reigns for last. Reigns crawled over to Triple H and Triple H taunted him. He then told him, “Believe in Evolution.” He said it again before giving him the Pedigree.

The first round of an 8-man tournament to determine the number one contender to Big E’s IC strap also happened on Raw. Why Alberto Del Rio doesn’t get the automatic title shot after continually beating Big E is a mystery. But at least he was in the tourney (even though he lost).

RVD beat Del Rio with the 5 Star Frog Splash. Cesaro defeated Mark Henry after the Neutralizer and will face RVD in the semi-finals. Sheamus beat Jack Swagger and will face Bad News Barrett who beat Dolph Ziggler with the Bull Hammer. Both semi-finals matches should be good if given time.

– For some reason, Rybaxel beat Cody Rhodes and Goldust.

– Alexander Rusev tapped out Xavier Woods. I dig him more every time I see him.

– Damien Sandow was knocked out by the Big Show after saying he was deserving. Deserving of getting knocked out I guess.

– John Cena did comedy and then turned serious and challenged Bray Wyatt to a cage match at Extreme Rules.

Without Daniel Bryan, the show definitely lacked babyface energy, but the Evolution reformation was very cool. I’m not sure Daniel Bryan versus Kane is the way to go at the PPV, so I’d definitely hope for some sort of 8-man tag. And now that John Cena and Bray are going to be in a cage, it seems even less that War Games will be the idea.