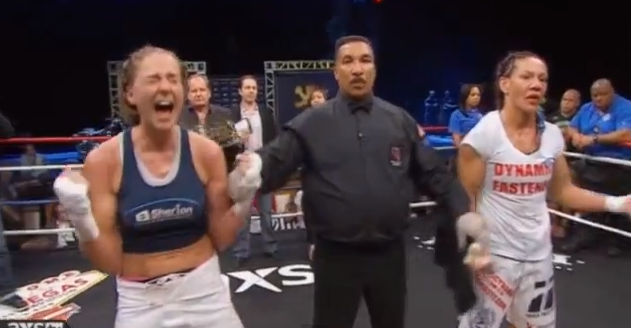 While not that many folks saw it and I doubt it has any effect on the possibility of Cris Cyborg (who I think goes by Cristiane Justino now) facing Ronda Rousey either later this year or early next year, I think many were shocked to see Cris Cyborg lose in any kind of combat at Lion Fight 14, which you watch in full below.

Kickboxing hinders one of Cyborg’s main strength, which is the ability to grab a clinch and use her strength to maneuver her opponent to the ground and use her ground and pound. Here, whenever she threw down her opponent Jorina Baars, they had to restart.

In the first round, Baars used her tremendous reach with front kicks and head kicks to make Cyborg look quite human, buckling her once and putting her down another time. It was incredible to see.

The second was closer. Baars landed lots of leg kicks, but was also knocked down by a right hand that Cyborg didn’t even follow through with, as she was caught off-balanced.

Round three was ridiculous. Cyborg rag dolled her to the ground. Baars hit a spinning back kick right to Cyborg’s chest. She also rocked Cyborg with a knee to the jaw that sent Cyborg into the ropes and nearly down.

Cyborg had a great fourth round, getting inside, finding her range and throwing Baars around whenever they got close to each other. She landed a superwoman punch to end the round that rocked her.

In the fifth, Baars put Cyborg down with a brutal back kick. It was scored a knockdown. She spent the rest of the fight playing defense and just making sure Cyborg didn’t put her out. It was a great fight. Baars won a unanimous decision to win the bantamweight title.