This episode should be a continuation of the first episode which was getting fighters into the house.

Richardson Moreira faced Alexandre Machado and just blitzed him in the first round. Machado kept trying to take it to the ground since he was a jiu-jitsu guy, but couldn’t. The only time they went to the ground is when he was knocked out.

Markus Perez Echeimberg is a self-professed nerd who loves Bruce Lee. He’s facing Guilherme De Vasconcelos who is a former model and kind of looks like Roger Huerta. Markus said he wasn’t there to win it all, only to give it his all. Well, his all wasn’t good enough as he tapped out to a rear naked choke in the first.

Marcos Rogerio calls himself “Big Foot” which I’m sure will be changed if he ever makes it into the UFC. He faced Thiago Santos. Santos’ third kid was just born and he wasn’t able to see his birth because he was at the show. Santos came in and got stuck in a guillotine and tapped out in the first.

Pedro Paulino Santana faced Ismael De Jesus. De Jesus trains with Renan Barao. In the first round, De Jesus took him down and Santana’s finger dislocated. He stopped the fight and asked the doctor to pop it in. Sin Cara feels his pain. Since he asked the fight to be stopped, he loses on TKO. De Jesus moves on.

Antonio Branjao faced Fernando Camoles Ribas, who has a judo base. After losing the first round, Branjao got a big takedown and ground and pounded his way to stoppage in the second.

Marcio Junior goes by the nickname of Lyoto. I wonder if he fights like Machida. Actually, he says that’s exactly why people call him that. Welp, here we go with more decisions. He faced Giuliano Arante. Unlike the real Lyoto, this Lyoto won in the second round with a guillotine. The other guy should’ve been nicknamed Wanderlei as that’s who he fought like.

Bruno Silva says he hits and gets hit a lot and can take punishment. Vitor Miranda looks like Lex Luthor so that’s his nickname. He lost his son in 2011 and was also on the last TUF Brazil as an assistant coach. Silva was no liar. He took a ton of punishment. In the second, Miranda threw a head kick and Silva did the Flair flop and the fight was over. Wanderlei said that if there’s a heavyweight that becomes injured, Silva will be called.

All the fights to get into the house are done, but before they pick teams, Wanderlei tells Chael that he must apologize for the words he said a few years ago that made fun of Brazilians and Chael said he wouldn’t do it. Wanderlei walked off the stage and said he was quitting. Chael said he wasn’t quitting and said how it worked was that you fight in the cage and that resolves it. Chael said if Wanderlei quit, he’d accept his resignation and would do the show alone. 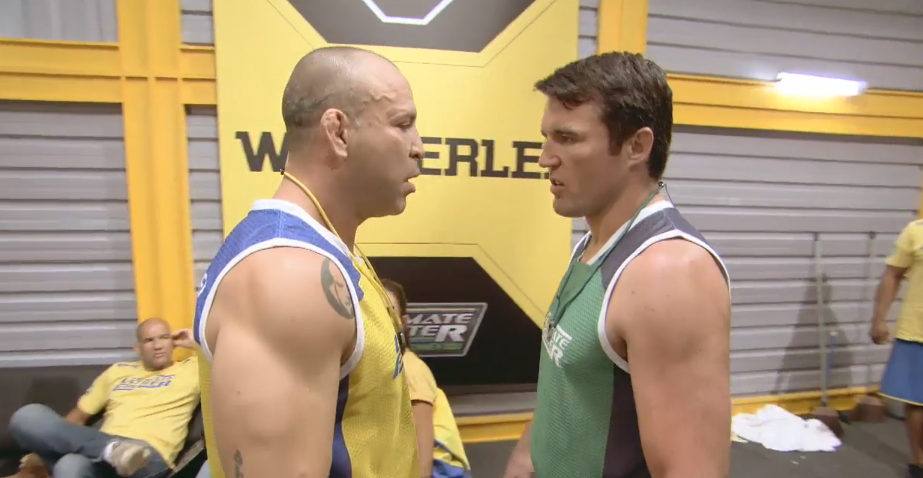 Thoughts: None of the fights were all that interesting, but the fireworks between Chael and Wanderlei made up for it in the end. The show starts next week as far as I’m concerned.