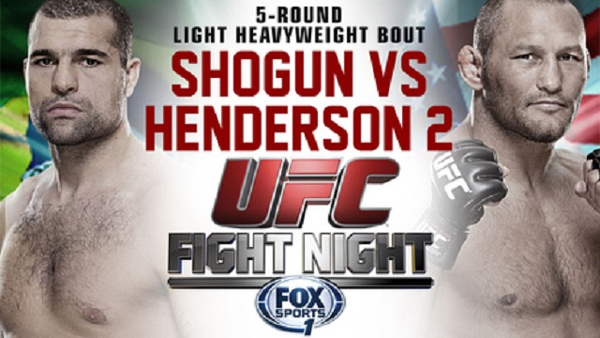 Sunday UFC? This card comes from Natal, Brazil and really, my only interest in it is the main event. It’s the rematch from one of the best fights in company history from UFC 139 in San Jose.

Here’s our Shogun vs. Henderson 2 play by play:

Jason threw a big right hand and Siler had a delayed reaction to the punch and went down on a left hand. Jason went to follow him to the ground and started to up kick before the fight was stopped. Live, it looked like the right stoppage. In slow motion, it looks like it wasn’t. However, referees can’t watch the fight in slow motion.

Prazeres is really strong, especially in clinches. He’s not allowing Taisumov to get any striking going. He got two takedowns simply by strong manning him down. He was able to get into the mount quickly. He went for an arm bar and didn’t get it, which allowed Taisumov to get him back inside his guard. Taisumov got a point taken away for grabbing the fence early in the round. So that’s a 10-8 round for Prazeres.

Between rounds, Dana White tweeted this photo out of he and his puny friend the Rock watching the show on TV. 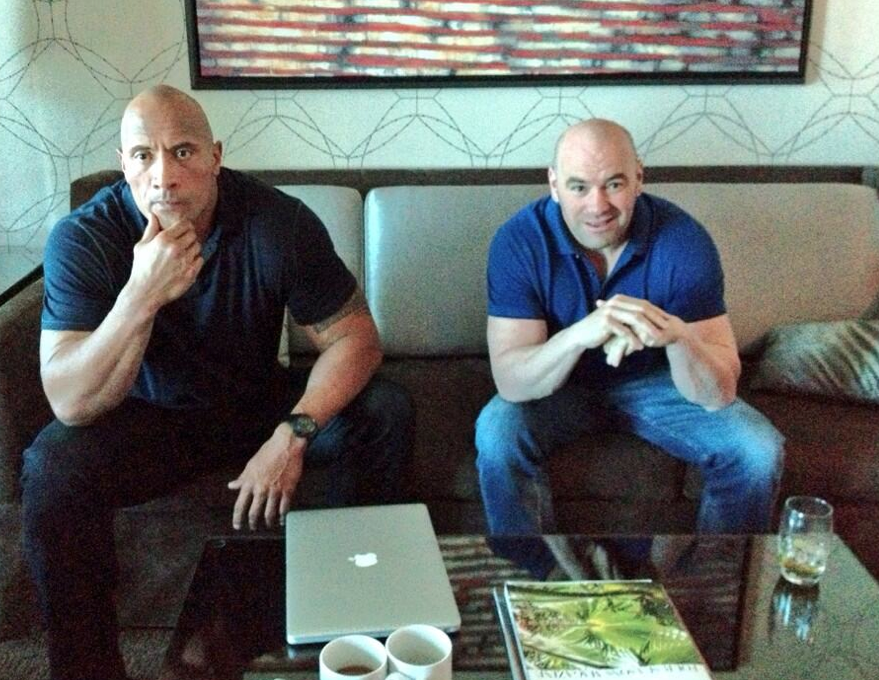 Taisumov is good off his back. Prazeres is so aggressive, but Taisumov is able to get out of bad positions quickly. Taisumov got another point taken off for instinctively grabbing the fence again. He immediately recognized it and half apologized, but still was penalized. Prazeres is so strong and quick with his strikes. He’s going to win the round 10-8 again.

Taisumov put his hand on the cage again and Mario Yamasaki basically told him to not grab it again or else he’ll be disqualified. Prazeres got a takedown again and this time, Taisumov didn’t get a point taken away. Prazeres should win an easy decision here.

It was a wrestling heavy first round. Villante got the takedown and worked most of the round from the top. Maldonado was active from the bottom trying to defend all the elbows and knees to the legs. Easy round for Villante.

This was a great round. Villante busted Maldonado wide open with a few knees to the head. That inspired Maldonado to turn it into a boxing match, which is more his style. He brought the fight to Villante and won the round.

Villante is exhausted and Maldonado is going to both the head and the body. Maldonado was picking him apart. He hit Villante once and I think shot flew out. Villanted tried to get it back to the ground, but to no avail. Herb Dean really should stop this as Villante can’t even get his hands up. He’s target practice. He took an absolute beating. That’s a 10-8 round. I have it 29-27 for Maldonado.

Parke is the TUF Smashes winner and Santos won TUF Brasil 2. Parke has a mouse under his eye and then was poked in the other eye. Parke’s striking stance is interesting in the way he holds his guard up. Santos scored with leg kicks. Tough round to call.

Parke had a point taken away for grabbing Santos’ shorts. Parke may have got the point back by winning the round. This is a tough fight to call. Both are scoring inside, both are landing combos, and neither can do anything with each other up against the cage.

I wish I could give the fight all 10-10 rounds and then have Santos win based on the point deduction (which was kind of BS anyway). Round three was about Parke working on Santos, trying to get him down. Instead, it was just Santos fighting with his back on the cage making sure he didn’t get taken down. This thing could be a draw.

Winner: Neither as the bout was ruled a majority draw

One judge had the fight for Santos and the other two had it as a draw.

Off the fence, Dollaway landed a three punch combination and knocked out the favored Ferreira.

Winner: CB Dollaway by way of 1st round TKO

The first round was mostly an awkward dance. Neither guy wanted to make a mistake and thus, nothing looked smooth. Well, that was until about a minute left. Henderson landed a big punch and Rua staggered back. Up against the cage, Rua landed a sharp right-left combination when Hendo was going for the kill. Henderson went down, surprisingly got back up, and was nearly put out after being on the ground again, but was saved by the bell.

Shogun blasted him with an uppercut that would’ve dropped a heavyweight. Henderson went down, but didn’t go out and they were stood up. Shogun is being careful, keeping his distance with the jab. He’s up 2-0.

Holy hell. Just as it looked like Henderson was growing old in front of our eyes, he lands a right hook that destroys Shogun’s nose. He followed it up on the ground and it was all over.

Winner: Dan Henderson by way of 3rd round TKO