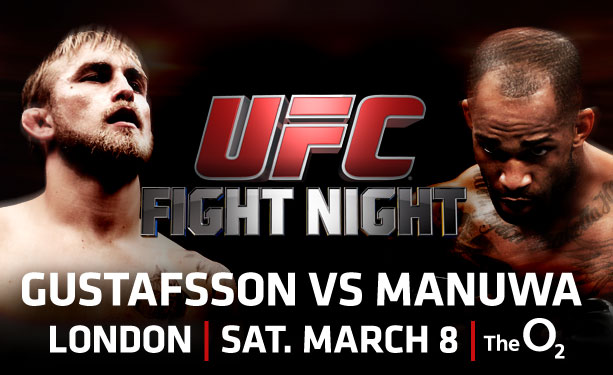 This has a chance to be a sleeper fight night card. With so much UFC on TV today, unless you’re the hardest of hardcores, a lot of these shows blend together. But this show that’s exclusively shown on Fight Pass has a chance to stand out a bit from UFC’s B and C shows.

Follow along our Gustafsson Vs. Manuwa play by play.

Winner: Gunnar Nelson by way of 1st round submission

Pickett looks a ton bigger than Seery, especially in the back. They both came out swinging hard. Pickett used his boxing early, but Seery caught him with a left and Pickett stumbled back. Pickett took him down with a big slam. He spent the rest of the round staying active and on top until Serry got up with just less than 20 seconds left. They stayed in the pocket and were launching major punches. Great first round.

Pickett worked his style in the second, securing takedowns and looked great with his boxing. Take nothing away from Seery though as his boxing is excellent.

Seery poked Pickett in the eye for the second time (did it in the first). Seery had some great counter punches, but they made Pickett upset as Seery picked him apart a bit. Pickett went back to the takedown and slammed him down a couple times. Pickett will win the decision, but I would love to see Seery fight again.

The two guys are pretty evenly matched. Johnson was the aggressor, but seemed frustrated that Guillard wouldn’t engage. He came in and ate a half uppercut/half hook in the best punch of the round. Johnson went for the takedown but didn’t get it. Guillard wins the round for the punch.

Johnson wins the second round partly because Guillard did nothing at all of note. But late in the round, Johnson finally caught and nearly dropped him with two punches and a knee. Guillard did a good job keeping his composure.

Johnson cleaned him up a bit in the round. Guillard thought he was poked in the eye at one point and stopped fighting and it gave Johnson the chance to follow up against the cage. The referee didn’t stop it. Guillard tried to throw his right hand and Johnson would follow it up with nice combinations. Guillard had to know that he was losing and really did nothing in the third.

Gustafsson ducked under for an early takedown. He kept him down for much of the round. Manuwa looked comfortable on the feet, but not on his back. He landed a couple nice shots late in the round, including a left hook to the gut.

The second round was insane. Manuwa was using leg kicks and following up with right hands to slow up Gustafsson until Gustafsson got inside, grabbed the back of his neck, and delivered a brutal knee to his chin. He followed up with a right hand that dropped him and finished him on the ground.

Winner: Alexander Gustaffson by way of 2nd round TKO