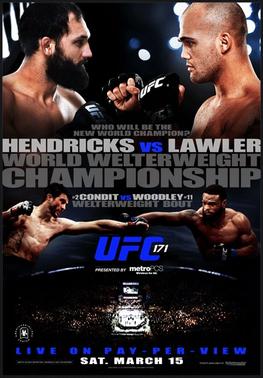 Johny Hendricks provided a little drama to an event that definitely lacks drama. It lacked a lot of things. But that’s what happens when your biggest star leaves and the best guys to replace him don’t have even 1/2 his star power. But that’s what this show is about.

The winner between Johny Hendricks and Robbie Lawler will become the UFC welterweight champion. In a sense, it would be better if Lawler won the belt because his story as better. He’s a long-time UFC fighter who came in strong, lost his way, and has come back better than ever. Hendricks put a pounding on Georges St-Pierre, but because of the archaic scoring system, didn’t get his hand raised. If he actually beat St-Pierre, he’d be a main man. Beating Lawler isn’t as special.

St. Preux took him down immediately and used what Rogan called the Von Flue choke. That was quick.

Winner: Ovince St. Preux by way of 1st round submission.

Lombard looked great in the first round. He unloaded with his left hand and made Shields look like a less-than athlete. Lombard looked to be worried about gassing out as when he knocked Shields down, he didn’t follow up. Maybe he was simply worried about going to the ground with Shields. Shields got put on his back again and Lombard finally followed up and fell right into Shields’ guard. Shields did zero in the round.

The second round wasn’t as one-sided as the first, but still, Shields couldn’t do anything. He landed a couple of kicks that he didn’t really throw hard because he expected to hard shots in return. Lombard took him off his feet twice with sweeps. And he also landed the bigger shots. This is an easy 2-0 fight for Lombard so far. Jake needs a stoppage.

What a nothing round this was until the last 10 seconds. Shields suckered Lombard into shooting and falling for the guillotine, but Lombard lasted. Easy win for Lombard here.

Jury is trying to set Diego up for the head kick. Diego is coming forward and trying to get Jury to engage, but Jury’s not falling for it. Jury caught him with a nasty right hook and it didn’t even phase Diego. He took him down at the end of the round. Jury’s round.

This is great. Diego’s a bloody mess. Jury popped him right under his left-eye and like Drago in Rocky IV, Diego wiped his eye for blood. But it energized him. That wasn’t necessarily good for Diego as he took a ton of punishment, but he kept pushing the pace. Jury got a takedown and Sanchez tried to sink in a guillotine, but Jury was out.

The third round was a bit of a let down. Sanchez didn’t push the pace like you would’ve expected him to. Jury stayed away, fought smartly, and scored two late takedowns. He wins every card.

Woodley took control of the fight immediately with two big right hands. Woodley is tremendously athletic. Later in the round, Condit started to pepper him a bit, but Woodley got two big takedowns. Woodley just missed on a spinning backfist that would’ve ended him.

Late in the second, Woodley kicked him on his left knee and and Condit tried to spin with the kick, but his right foot got caught in the mat and his blew out the knee. Big win for Woodley.

That was a rock ’em sock ’em robots kind of round. They stood there right in front of each other and threw a ton of punches. At this point, Hendrick’s hands are faster as he doesn’t have to load up like Lawler does. They had quite the trading near the end of the round with Hendricks landing punches and knees and Lawler landing a big left at the bell. I have it tied at 1 apiece.

Halfway in the third, Hendricks was having his way with Lawler. His boxing is just slightly better. But Lawler pulled out heavy shots and Hendricks was taking punishment. It’s the best flurry of the fight so far. Hendricks went for the takedown to stop the momentum. Hendricks came back near the end as Lawler got tired, but this was Lawler’s round. I have him up 2-1.

Lawler looked great to start the round. He’s hammering Hendricks with the right left combo. His power hand follows directly after his jab. Rather than move around or maybe try to wrestle, Hendricks is standing right in front of him. Hendricks is bleeding over his right eye. These guys were toe-to-toe in the center of the cage for the entire round. It was left hand after left hand from both guys. Hendricks would come over the top with his left hand and Lawler would catch him with a short right hook. He used his right jab so effectively, battering Hendricks’ already bleeding eye. I have Lawler up 3-1.

They were tired. But it was a back and forth round. Lawler blasted him with a right hand that buckled Hendricks. Then Hendricks came back and blasted Lawler back and it looked like he was ready to go. The first rounds could’ve gone either way and will determine it. Hendricks got a takedown. Lawler was exhausted. Hendricks won the round. I still have Lawler winning 3-2. Whoever wins the first round wins the fight.