Whereas last week’s Raw was angle heavy, this week’s Raw had some really good wrestling. 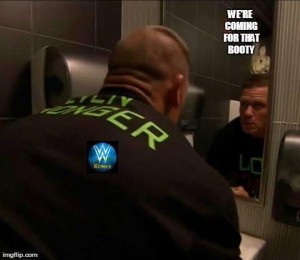 As everyone knows, John Cena is a bad actor. Before his big match against Luke Harper, he showed a different shade to his normal character. He was scared. Yet, he played a bad scaredy cat. In an ode to a terrible angle from Nitro in 1998 (but not exactly the same thing), Cena was in the restroom and looked either constipated or bothered. He washed his face. And when he was done, he looked in the mirror and saw a sheep mask that wasn’t there before. And when he turned around, it was gone.

Immediately, people thought it was the exact same thing as the infamous Warrior/Hulk Hogan angle on Nitro where Hogan saw a visage of Warrior in a mirror and Eric Bischoff couldn’t. That didn’t happen here. The mask wasn’t there and then it was. It was more like the Wyatts were playing tricks.

It was actually exactly like this Undertaker/Orton segment from 2005.

It led to a match that was loved by the crowd in which Cena faced Luke Harper. There wasn’t a finish. Instead, the lights went out and when they came back on, Cena was tied up in the ropes with a sheep mask on and surrounded by the Wyatts. It was quite the visual.

The Undertaker sends Brock over the top.

In the main event segment Brock Lesnar and Paul Heyman were in the ring together. Heyman was putting over Taker’s streak and Brock took the mic and told him to stop. He then said he knew the Undertaker was in the building and wanted to fight.

The druids came out with a casket and placed it by ringside. After a long entrance and a few minutes of Brock being unsure of the casket, he opened it and nothing was inside. He and Paul were upset until it opened again and Taker was inside. He came into the ring and Paul screamed for Brock to get out of the ring. Brock backed down a bit, but threw the first punch that was blocked and the Undertaker hit him with a bunch of uncontested shots, threw him into the ropes, Brock hung onto the rope and then Taker charged him and clotheslined him over the top rope. Brock didn’t clear the casket, but broke his fall with his hands or else he would’ve hit the top of it with his head.

Brock really needs to put a beating on the Undertaker next week on Raw, but it still doesn’t feel like Brock can win.

Orton started cackling and then Big Dave speared him, ripping his jeans mid spear. Dave and Randy will have a singles match at Raw next week which is the go-home.

– Daniel Bryan tweeted that he wasn’t at the show after his beating last week.

Not medically cleared to be on #Raw tonight. Won't stop me at WrestleMania and The Authority definitely can't stop the #YesMovement

– Christian beat Dolph Ziggler, Alberto Del Rio, and Sheamus in a fatal four-way to get a shot at Big E’s Intercontinental title on Main Event. There was too much going on, but the finish was really good.

– Sin Cara, with Scooby Doo, beat Damian Sandow and that was all we saw of Scooby Doo.

– Triple H and Michael Cole were sitting in the ring and did an interview where Triple H said this wasn’t the Yes Movement, it was the Reality Era and he was going to be the champ at WrestleMania.

– Cody Rhodes pinned Fandango but Goldust dancing with Summer Rae was even more entertaining. Summer tried to pretend that she sprained her ankle, but it went nowhere.

– Hulk Hogan, Arnold Schwarzenegger, and Joe Manganiello were in the ring to put over Arnold’s new movie, each other, and the Andre The Giant Memorial Battle Royal. Manganiello is huge. It was campy as hell and fun and even the Miz couldn’t ruin it. Rather than me trying to describe it, watch it below.

– Vicki announced that every woman on the roster will face AJ Lee at WrestleMania in the Vickie Guerrero Diva’s Invitational. Even Tamina who smirked pretty hard.

– Razor Ramon and not Scott Hall is going into the Hall Of Fame (which will be live on the Network).

– The Shield and the Real Americans ended the wrestling portion of the show with a hot match. The Shield are crazy over right now. After they won the match, Libertarian Glen and Corporate New Age Outlaws came out and said they were facing the Shield in a 6-man at Mania. Kane then said, “Believe that.”

The show was very solid, though there’s something missing with Taker vs. Lesnar and I don’t think it’s anyone’s fault. We just know Taker is winning. It gets harder each year to create intrigue in this match, but you know it’s going to be really good.

It was also smart holding Daniel Bryan off the show, but he needs to come back like a crazy man next week. This show feels stronger going into the go-home Raw than last year’s WrestleMania with the Rock which is a good thing.