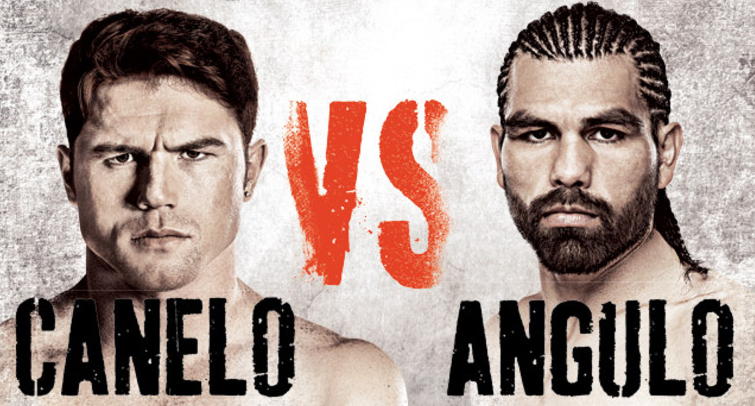 We’ve gone over just about everything you can go over when it comes to this fight the last few days. Nothing left but the punching.

(In the semi-main, Leo Santa Cruz beat Cristian Mijares in a near shut-out.)

Canelo Vs. Angulo Play By Play

There wasn’t much jabbing going on here. Canelo came out swinging hard and digging deep on uppercuts and hooks. Angulo didn’t really get anything going.

More of the same in the second. Canelo is landing just about every power shot he’s throwing. Angulo is trying to get inside, but is paying for it every time. It’s hook, uppercut, hook, overhand right.

Angulo is absorbing such big shots and is taking a beating. He’s trying to fight inside, but isn’t able to really let his hands go like Canelo is. I don’t know if he’s holding back or doesn’t want to get tired.

Angulo’s punches are in slow motion with not a ton behind him. Canelo is able to wind up and throw all of his punches with speed and power. It’s a complete mismatch right now.

Better round for Angulo, but he’s taking some kind of beating here. Canelo is landing the left hook at will and the right side of Angulo’s face is taking a lot of punishment. I don’t think Canelo is getting tired, but he wasn’t nearly as active which allowed Angulo to land more.

Both of Angulo’s eyes look like they’re going to close before it’s all said and done. But it’s the second round that Angulo has been able to stay in there. The first four rounds were clear ass whippings. These last two were closer.

This was Angulo’s best round. He was actually able to put together some combinations, but I don’t think he had much on them. Canelo is still able to land from all angles.

That was an entertaining round and one in which it can be argued that Angulo won. He told Canelo to bring it and Canelo waived him in as well. Both guys were able to land. Angulo might’ve gained some confidence in that one.

Not as good of a round for Angulo as last. Canelo was playing with him a bit by shoulder rolling and making him miss. Canelo snapped his head back nasty with an uppercut.

Canelo landed a big uppercut and Angulo kind of staggered backward. Referee Tony Weeks stopped the fight. He was also talking to the doctor in between rounds to discuss stopping it.

Winner: Canelo Alvarez by way of 10th round TKO