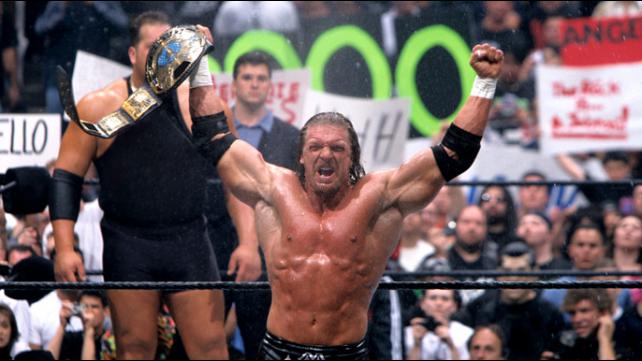 His WrestleMania career started off inconspiculously. At WrestleMania 12, he was tabbed to face the returning Ultimate Warrior. It should’ve been a good spot to be in because outside of the main event between Bret Hart and Shawn Michaels, it was the biggest match on the card. It should’ve given Triple H visibility on WWE’s biggest show of the year. But instead, it was miserable for him. Warrior didn’t want to do anything with him or for him, no-sold his finisher, and beat him in less than two minutes.

WrestleMania 13 was a bit better for him. While the card is mostly remembered for maybe the greatest match in WrestleMania history between Stone Cold Steve Austin and Bret Hart (and really, nothing else), Goldust and Triple H had probably the second best match on the card. Triple H added a cool dynamic to his character as his valet was a jacked up female body builder named Chyna. She swung Goldust’s valet Marlena around like a rag doll, helping Triple H win the match.

Triple H’s involvement in WrestleMania 14 was as a second to the champion Shawn Michaels as DX. He won the King Of The Ring in the previous year, helping up his profile. He beat Owen Hart early in the show and was kicked out of the WWF title match between Shawn Michaels and Stone Cold Steve Austin.

It was what happened the next night on Raw, where he took over as the leader of DX as Michaels began a four year retirement, that took him to the next level.

It didn’t happen at WrestleMania 15 though. After beating the Rock at SummerSlam in the summer of 1998 for the Intercontinental title, he injured his knee. By the time he came back, he was put into a feud with Kane and Chyna, who turned on him. His match at WrestleMania 15 with Kane was just one of too many matches that didn’t mean a whole lot. There was a turn during the finish as Chyna helped him win, reuniting DX once again.

By the time WrestleMania 2000 came along, Triple H had already won the WWF championship three different times. He was the champion in the main event against The Rock, Mick Foley, and the Big Show. It was a long match that didn’t work as well as it should’ve and when it was over, Triple H was the first heel to raise his hand in victory at the end of a WrestleMania (Hulk Hogan spoiled that one for Yokozuna).

At WrestleMania 17, Triple H was out of the title picture, but faced the Undertaker for the first of three WrestleMania matches. It was a good match, but Triple H would be victim number nine.

In May of that year, Triple H tore his quad in one of the best Raw matches in history, teaming with Austin and losing the tag straps to Chris Benoit and Chris Jericho. Triple H tore his quad before the finish, but gutted it out and finished the match. He’d come back bigger than ever (both physically and from a star perspective), win the Royal Rumble, and face the first Undisputed champion Chris Jericho as the “main event” at WrestleMania 18. Most feel the real main event was the Rock vs. Hollywood Hulk Hogan, but Triple H and Jericho was the last match to go on. The match was above average, but there were two issues with it. For one, they had to follow what people felt was the real main event. And two, no one thought Jericho had any chance. It was written that Triple H was going to be the champion again.

By the time WrestleMania 19 came around, Triple H was World champion rather than WWE champion. After Brock Lesnar beat The Rock for the WWF title at SummerSlam, Triple H was gifted the big gold belt, christened the World title so that both Raw and Smackdown brands would have a championship. He lost it and regained it and faced Booker T at WrestleMania 19 with his newfound stable, the Evolution at ringside. It felt like the right time to make Booker T and lose the title to him, but that didn’t happen. Instead, he pinned him in a good match, but the angle was lacking because of the reliance on subtle racism that didn’t work at all in 2003.

He would help make someone in 2004 though. At WrestleMania 20, he faced Chris Benoit and Shawn Michaels in a three-way match that was exceptional. And at the perfect moment, Triple H tapped out to Chris Benoit and Benoit became the World champion. At the time, it was one of the greatest moments in WrestleMania history.

At WrestleMania 21, Triple H was in the midst of his 10th title reign. His Evolution-mate, Batista won the Royal Rumble, earning a shot at his title. Triple H tried to steer him toward facing John Bradshaw Layfield so Evolution could own both titles. But Batista saw through his plan and faced Triple H at WrestleMania 21, beating him after one of the best storylines the company has done. For the second year in a row, Triple H helped make someone.

He did it again at WrestleMania 22. Though he was challenger and not champion, by losing to John Cena, he helped cement Cena as a player in his second full year as a main eventer. He was more than likely going to face Cena again at WrestleMania 23, but he was hurt again, this time tearing his other quad as a babyface, re-teaming with Shawn Michaels as DX against Edge and Randy Orton, Rated RKO. He would miss WrestleMania for the first time since he debuted.

At WrestleMania 24, Randy Orton had declared the age of Orton. Orton faced John Cena and Triple H in a triple threat match won by Orton who pinned Cena after Triple H pedigreed Cena. Orton and Triple H would feud for most of the rest of the year, culminating at WrestleMania 25 in the main event. It was a personal feud in which Orton attacked Triple H’s father-in-law (Vince McMahon) and brother-in-law (Shane McMahon) and then his wife, Stephanie McMahon. Triple H broke into Orton’s house to attack him. The actual match was one of the most disappointing main event matches in the history of WrestleMania. Yet again, Triple H was in the “main event” and overshadowed by a much better match that went on before him. It was his friend Shawn Michaels who took on the Undertaker and stole the show.

At WrestleMania 26, Triple H was in a throwaway match with Sheamus. He took time off after the culmination of their feud but was back by WrestleMania 27, this time trying to break the Undertaker’s streak yet again. The Undertaker retired his best friend Michaels the year before and part of the storyline was Michaels telling his friend that he couldn’t win. And he couldn’t. In the best match of the show, the Undertaker went to 19-0. The best part of the match was when Triple H used the Tombstone on Undertaker. It was one of the few moments in the past years when you thought Undertaker might lose. Even in winning, the Undertaker was worse off in the end, looking like the one who lost rather than the one who won. That would play into their rematch the next year.

But this time, it was in Hell In A Cell. Michaels was the third man in the ring as the referee. Triple H didn’t want the match, but the Undertaker challenged him, feeling like how he looked when the match the previous year was over wasn’t the memory he wanted fans to have. The match again stole the show and was the end of an era. I personally enjoyed it more than the previous year because it just felt like a bigger spectacle.

At WrestleMania 29, Triple H had a rematch with Brock Lesnar from SummerSlam the previous year. Lesnar “broke” Triple H’s arm twice and Triple H beat Lesnar in a semi-disappointing match in hindsight.

Triple H has been in some of WrestleMania’s greatest matches. The last two of his matches with the Undertaker at WrestleMania were excellent. But his match with Chris Benoit and Shawn Michaels was his best. It was also the first time at WrestleMania where he made someone, so it felt extra special.

Shawn Michaels vs. Triple H vs… by WWFManiac441

Triple H faces Daniel Bryan in the most important match on the show. If Triple H wins, he’ll face Batista and Randy Orton in the main event for the WWE World title. But if he loses, which should happen, Daniel Bryan will enter the match. Triple H can make someone yet again.