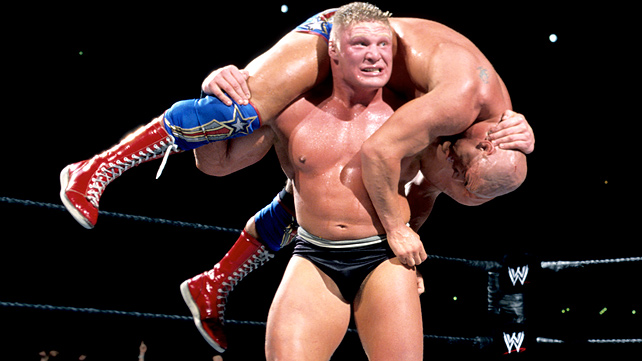 Brock Lesnar missed WrestleMania 18 by one day. True to form, WWE waited until the day after the big show to debut the new behemoth. Lesnar rose quickly through the ranks, winning the King Of The Ring, setting him up with a main event match at SummerSlam 2002 against the Rock for the Undisputed title, which he won. After feuding with the likes of the Undertaker and the Big Show, he finally lost the title, setting up his WrestleMania 19 match with Kurt Angle.

Before his match with Kurt Angle, he had to win the 2003 Royal Rumble, eliminating the Undertaker who entered last. He was positioned as a babyface this time, rather than the monster heel he debuted as. Angle was beat up going into the match and while it was expected to be a fantastic match, the buzz was off slightly because of how often they’d faced each other in the prior months.

It was on its way to being a classic until the climax spot. Brock went to the top rope to pull off a shooting star press, which was a move he’d done in developmental before, but not one that he’d done on WWE TV before. It was truly a WrestleMania moment ready to happen. Only, it didn’t. Angle was too far out and Lesnar had to be tired. He jumped, didn’t rotate quickly enough, and landed on his head, knocking himself out. Angle had to help him through the rest of the match, which Lesnar won with a F-5.

Lesnar traded the belt with Angle through the summer, winning it for a third time during the famous 60-minute Iron Man match on Smackdown. At the Survivor Series, Lesnar and Goldberg were shown on the screen at the same time. At Royal Rumble, Lesnar interfered in the Royal Rumble match, causing Goldberg to be eliminated. Goldberg would get his revenge at No Way Out where Lesnar was defending his title against Eddie Guerrero. In one of the most memorable non-WrestleMania moments in WWE history, Goldberg helped Guerrero win the championship. That set up their WrestleMania XX match.

It was widely known within the wrestling community that this would be Goldberg’s last WWE match as he’d signed a one year contract starting the day after WrestleMania 19. It came out shortly before the big show on the Internet that Lesnar was also leaving. This was one of the first times that the Internet wrestling community influenced a major show as the fans booed both wrestlers in the match and neither guy seemed to be interested in pleasing them. Stone Cold Steve Austin was the referee in the match and tried to appease the crowd by hitting the stunner on both guys after Goldberg got the win.

Lesner gained more acclaim while he was gone. He tried out for the NFL. He worked in Japan. And he fought Vince McMahon in court and won. As part of Lesnar’s contract, there was a ridiculous agreement that didn’t allow him to compete against the WWE until 2010. WWE was going to lose the lawsuit filed by Lesnar and they agreed to a deal which allowed him to set his sights on MMA and specifically, the UFC.

In his four years in the UFC, he became their biggest star, but a serious bout with diverticulitis caused him to retire. Retiring allowed him to strike up a sweet deal with WWE, which started the day after WrestleMania 28 when he attacked John Cena. After a great match with Cena, he feuded with Triple H which culminated in him breaking his arm twice, but losing to him at WrestleMania 29. The match was the worst of their three which included a really good match at Summer Slam the previous year and a solid cage match at Extreme Rules.

Brock Lesnar faces the Undertaker in a continuation of a pretty one-sided feud they had back in 2002 and 2003. Lesnar, as champion, generally got the best of the Undertaker. But it’s a whole different story at WrestleMania. I think we’ll see some great moments in this match, but I don’t think Brock breaks the streak.