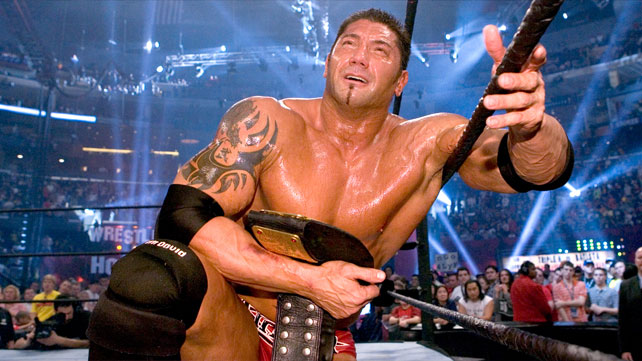 The next WrestleMania profile is on someone who went away for a few years and is now back. Batista has been in mostly main event matches at WrestleMania. Let’s look back.

Even though Batista was in the WWE during the spring of 2002 (Deacon Batista anyone?), he didn’t actually make his WrestleMania debut until the 2004 show, WrestleMania XX. During 2003, he was oft-injured with a triceps tear, but in late 2003 he was back as part of Triple H’s Evolution stable. At WrestleMania XX, Batista, Randy Orton, and Ric Flair faced off against Mick Foley and the returning Rock (Rock & Sock Connection), in one of the main matches on the show.

Though Foley believes his performance was subpar, the match was still fun as Rock was full of energy. Orton pinned Foley to prolong their feud.

Batista’s big initial run would come before WrestleMania 21. After winning the Royal Rumble, he had the opportunity to choose which title to go after. He could face off against his partner in Evolution crime, Triple H or take on JBL. After a great tease, he chose Triple H. It was one of the best babyface turns WWE had ever done. He went on to beat Triple H as the main event of WrestleMania 21, which was more successful than the previous WrestleMania.

Batista missed WrestleMania 22 after being champ for much of the year because of another triceps injury. But at WrestleMania 23, he had the infamous “follow that” match with the Undertaker, possibly upset because they were placed so early on the card. During an excellent big-man match, the Undertaker beat Batista to win the World Heavyweight Championship and pushed his WrestleMania winning streak to 15-0.

Finally, at WrestleMania 26, Batista faced off against John Cena, defending his newly won WWE Championship. In what was a great match to watch live (as I was there), Cena won his title back, forcing Batista to tap out to the STF.

If we’re talking his greatest moment, no questions it’s his win over Triple H at WrestleMania 21. But as far as a match that’s rewatchable? I’m going with this Cena match.

Ever since his return before the Royal Rumble, it seems that WWE’s hardcore fanbase has made it loud and clear that they don’t want him in the role that he’s in. It’s not his fault. But WWE misread the tea leaves on his return. His Raw comeback was excellent in that it resulted in a strong rating. But today’s hardcore fanbase (which is now the loudest of loud minorities) isn’t hesitant to voice their disproval.

In a sense, they made sure that he turned heel, which is the best spot for him now. Say what you will about him getting his wrestling legs back, but heel Batista claiming that wrestlers today are really fans rather than stars is awesome. He’s great in the role.

At WrestleMania, he’s going to provide the heat that should allow Daniel Bryan to be made if all things go as we think they will in their possible three way with Randy Orton.