On Sunday evening at the I F D E S Lodge-Portuguese Hall in Gilroy, CA, Premier held their anniversary show. I’ve been to their last three shows and each was entertaining, yet in different ways. The first show (Cobb vs. Tannen) was my introduction to the Premier style which is to present wrestling as a sport, with a UFC type presentation. The second show featured Jeff Cobb defending his Premier Heavyweight Championship against Oliver John in one of the best matches I’ve ever seen live. And while this show didn’t have that type of match (though Dave Dutra and J.R. Kratos had a very good match), every single match was quality and it was a well-rounded card.

(Thatcher was scheduled to face Oliver John on the show, but the match was cancelled. John hurt his back in his match with Cobb.) 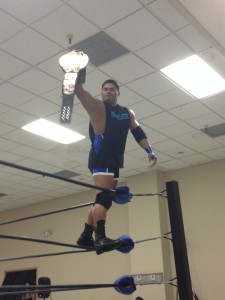 The match was a hard-hitting battle. Sledge is one of the bigger guys on the roster and it’s always amazing to see Cobb, who isn’t a tall man himself, do strong-man stuff on guys larger than himself. At one point, Sledge got Cobb up for a suplex and tried to go for it again, but Cobb blocked it and got Sledge up for his own delayed version of the suplex. He held Sledge up there for a good 10 seconds before bringing him back down.

The finish saw Cobb do his patented reverse power slam (or whatever he calls it). It really needs to be seen to be appreciated. He got Sledge up like he was going to powerslam him with momentum, but instead, went against momentum, creating his own for the slam. Cobb is a specimen. I just hope Cesaro or Big E don’t see this finisher as they may steal it.

(I later learned that Cobb’s finisher is titled Tour The Islands.)

Cobb’s next challenger is going to be J.R. Kratos who beat Double D Dave Dutra in the best overall match on the show. It told a simple big man vs. smaller man story, or as Dutra called it, “cat and mouse.” Dutra started the match off peppering Kratos with leg kicks as the big man wanted to devour him. He stayed away from him like a slick boxer would keep himself just out of range of big shots. He also incorporated MMA submissions like a guillotine and rear naked choke on the big man, trying to suck the life out of him so he could pin his shoulders to the mat. But it wasn’t enough as the big man finally pinned him and goes on to face Cobb in the main event of the next show.

(When Cobb beat Brian Tannen, I asked him if he would be able to put his finisher on someone as big as Kratos. He smiled and said that if Kratos moves up that ladder, we’ll see. He was right. We’ll see soon.) 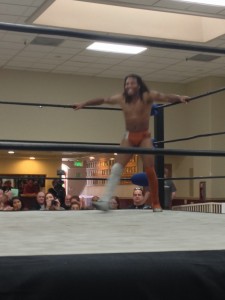 Hometown favorite from San Jose (just 20 miles north of Gilroy) Marcus Lewis, who went to the same high school as I did (Mount Pleasant) beat Julio Pedroza with a 450 splash in a fun match with great high flying. Lewis now has two wins under his belt as he tries to climb the ranks to get closer to the title.

Kaimina got his first Premier victory beating mystery opponent Jeckles The Jester. I wasn’t quite sure how to take Jeckels initially, but he and Kaimina had a solid match. Jeckels’ character a nice change of pace, but he also wrestled well so he fit in fine with the rest of the roster.

Dylan Drake and Derek Sanders stole the show early on with their heel mannerisms. Drake faced Buddy Royal and beat him with a Sharpshooter. He also had some great “Yo momma” snaps for the crowd.

(After the show, the fans started a “Double D” chant hoping to see Dutra so they could get his autograph and take pictures with him. Instead, Drake who has the same initials, showed up like they were asking for him. Funny stuff.)

Sanders, in his debut, lost to the also debuting Sione Finau aka The Mad Tongan. Sanders had “The Boss” on the back of his tights and when the crowd would ridicule him, he’d say, “I’m the boss!” After he lost to a version of a choke slam, he shook Finau’s hand and on his way out reminded everyone that he was still the boss.

The opening match was Nick Ruiz against John Redito. Ruiz, “The Wise Guy” worked on Redito’s arm the entire match and told the crowd that he was injuring Redito’s arm so that he couldn’t sign any autographs. Redito must be left-handed. Ruiz won with a chicken face.

While there’s no date set for the next show, we do know the main event. Cobb vs. Kratos should be another great spectacle. Premier president John LaRocca will be on this website sooner than that though as we continue our “He’s The Booker, I’m The Blogger” series, recapping old shows. Our first review was on Starrcade ’83. Next, we’ll look at the very next Starrcade show.

Check out photos from the event on our Facebook Page: