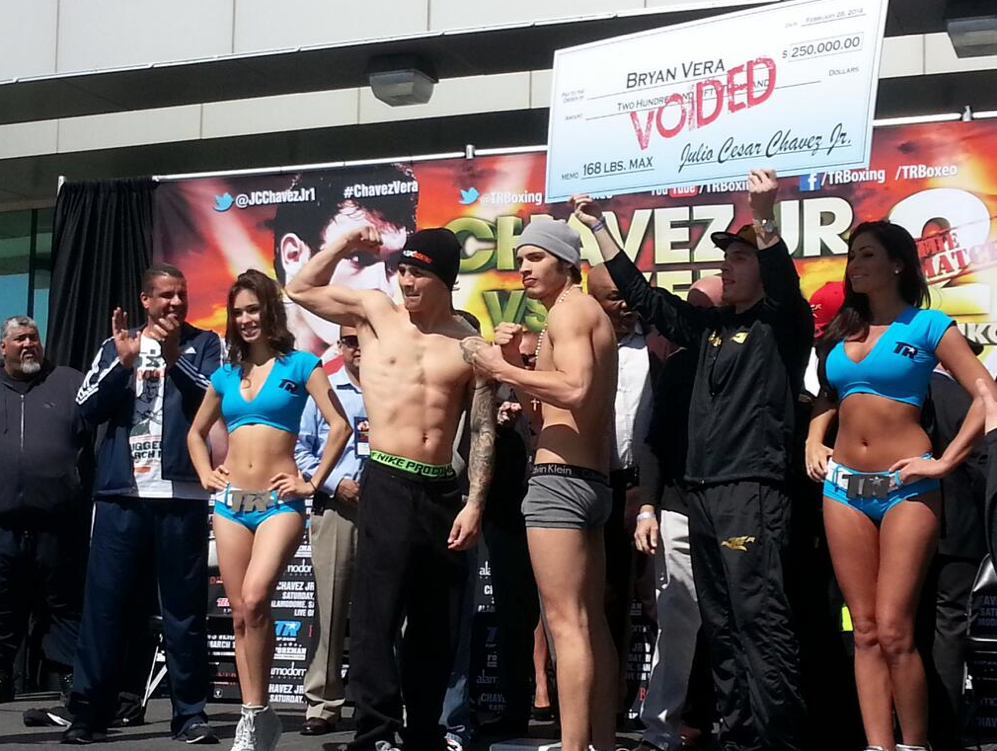 After the first fight which was a debacle in just about everyone’s eyes, this is redemption time for Chavez Jr. Brian Vera had been coming on strong before losing to Chavez Jr. and had really become someone you had to keep your eye on. Both guys have something to prove.

Chavez looked excellent in the first two minutes, moving his head and throwing his right hand. Vera looked better for the last minute, but Chavez took it.

Vera looked much better in the round. Chavez wasn’t moving his head as much and decided to stand right in front of him.

Vera is throwing his right over the top like a pitcher would throw a fastball. Chavez landed two awesome right hands, but Vera landed more of his rights, even if they weren’t as damaging. I’d give it to Vera.

Vera was having a pretty decent round until the end when Chavez blistered him twice. Both guys are digging on the inside with their uppercuts. Chavez looked to come to life a bit near the end.

Chavez is starting to gain some confidence and a bit of momentum. He’s fighting much more aggressively now and the power looks to be taking a toll on Vera.

Vera tried to throw something that looked like a MMA Superman punch. He either slipped or was suprised he threw it because he left himself wide open and Chavez threw a big right hand. The round was close, but I lean towards the bigger power shots of Chavez here.

This is the Chavez Jr. that people like to see. He really banged on Vera late to take it. I don’t know that he’s going to put him away, but he’s wearing on him.

This was a really good round for both guys, but Chavez wins it because of a blistering right hand. Every time Vera smiles, you know he’s been hit good. Vera fought well off the ropes and pushed Chavez’s head down and had a point taken away. That’s a 10-8 round for Chavez.

I thought Vera fought brilliantly from the inside in this round. He may have changed the momentum slightly. He was digging on those hooks and he avoided the big right hand.

Well, the momentum didn’t change. That was a great round for Chavez. Though, you have to wonder about his power at 168 as he’s hitting Vera with some great shots and Vera’s face looks better than his.

Vera’s toughness might be his worst enemy at this point. He took some huge shots in this round and he’s woozy. He’s throwing back, but his punches don’t have near the impact that Chavez’s do.

Vera probably wins the last round as Chavez just ran away and acted like a clown in the end.