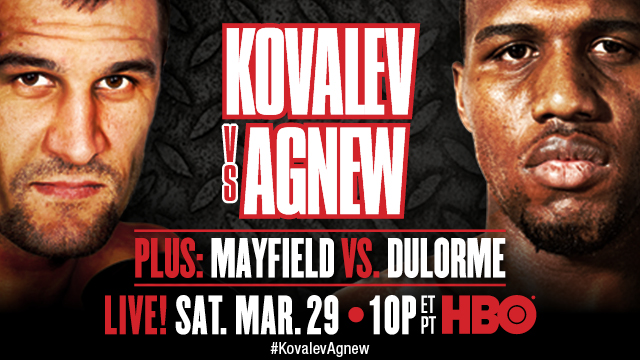 On the semi-main, Thomas Dulorme beat Karim Mayfield by decision, in what sounded like an uninspiring fight.

Agnew is coming out to Living In America by James Brown. He’s my new favorite fighter. Though, I’m not sure you want to be Apollo Creed if Sergey Kovalev is Ivan Drago.

Agnew, a southpaw, fights with his hands high. Most of Kovalev’s shots hit arms and gloves, but he threw the majority of the punches in the round. Agnew had a couple of sneaky counters including a nice right hook. Agnew hit him low late and Kovalev went down to a knee.

Much like the first round until late until right at the end of the round. Kovalev threw a lunging straight left hand right on Agnew’s jaw and he went down. He couldn’t try for the finish as the round ended right as Agnew got up.

Agnew’s strategy to force Kovalev’s shots to go through his gloves first is sort of working, but I think it’s just making Kovalev throw his punches from slightly different angles and they’re still getting through. Agnew’s trying desperately to hold on, but he went down again in the third.

Agnew nearly shot in a double leg simply to get Kovalev to stop punching while his back was against the ropes. If Agnew has any chance, he needs to throw those counter hooks like Mike Tyson. He’s content to quickly land and then get his guard back up. There was a clashing of the heads and Kovalev is cut just over his right eye.

Agnew was warned again for low blows. It seems like Kovalev’s corner was able to calm him down after the last round since he was so angry about being butted. It was a relatively calm round.

Agnew went down again, at least according to the referee. He took a body shot and went into a low crouch. Kovlev is racking up the points here.

Agnew couldn’t take it any longer. Kovalev faked a right, threw a straight jab to the body and Agnew stayed down this time.

Winner: Sergey Kovalev by way of 7th round TKO