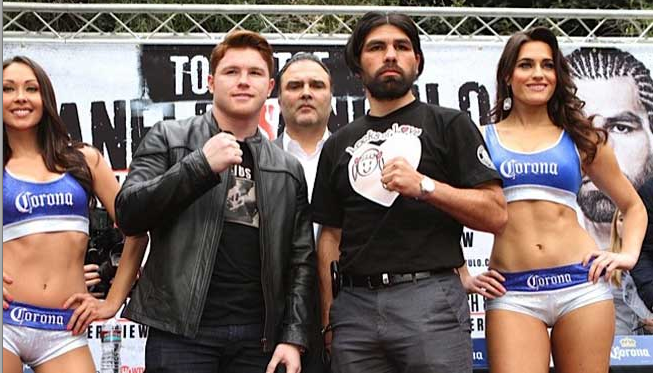 On paper, this fight seems like a great ‘comeback-from-a-loss-fight’ for Canelo Alvarez. After being taught a boxing lesson in how to not get hit by Floyd Mayweather, it’s smart to put Canelo into the ring with someone who won’t avoid being hit at all. In fact, in Angulo’s last two losses to Erislandy Lara and James Kirkland, he was stopped.

But there’s one other reason why this could be a good match for Canelo. Angulo will test his toughness, which is something people wonder about him. He hasn’t fought the who’s who of bombers in the division, but getting past Angulo would answer some of those questions.

GG, Duan, and Robert Silva who does the World Championship Boxing podcast break down Saturday’s fight.

Robert: Alvarez by 9th round TKO
Stylistically, this fight is a mismatch. Alfredo Angulo, while a ferocious puncher and all-action brawler, has no left jab and defense to speak of. Alvarez will have no problem connecting to Angulo’s body and will punish him all night long. My prediction: Angulo will be put away in the 9th. A nice comeback win for the prodigal Mexican redhead.

GG: Alvarez by 10th round TKO
I really love the match-up and the story of the fight. Alfredo Angulo is a very compelling figure as seen on Showtime’s All Access show. He’s also far more entertaining than I expected, but maybe it’s because Amir Khan is always breaking his balls.

If I was rooting for the story, I’d love to see Angulo win here. But I don’t think it’s going to happen. I think Canelo’s talent and athleticism is at too high of a level for Angulo to be able to fend him off all night. I think Angulo is a tough fighter, but I think his corner stops the fight late to save him. I do hope he peels off a few right hands that Canelo feels though.

Duan: Alvarez by decision
Most will view Angulo as a well-selected opponent for a young star in need of a win, and while that may be the case, it doesn’t quite tell the full story here. Yes, stylistically it’s a great match-up for Canelo. This is a guy who is not going to be tricky for him to figure out, he will give him the fight he wants, and Canelo will have most of the advantages in it. What it’s not however, is an assignment without risk.

Angulo has the reputation of a nearly man. He beats the guys he’s supposed to beat and falls just short at the higher level. But even in that, there has been an explanation for each of the losses on his record. Against Cintron, a flu bug had him looking like the living dead. The Kirkland match up: he fought foolishly and frankly threw it away. And in the Lara bout, a career-best performance was only spoiled by a single punch. The reasons are there and they’re all valid, but if Angulo is going to headline another major bill, he needs to bag the big win on Saturday.

You know what you get with Perro; pure pressure and dogged determination, real deal power and a chin of iron. He’s also shown marked improvement under the guidance of Virgil Hunter. And he presents a level of danger that Alvarez thus far has not had to face. Canelo has never come up against somebody who can truly press him for three minutes a round and has the power to make it count. If Angulo could put Lara on the floor twice, he’s capable of connecting with Canelo too.

Alvarez is the more gifted, the physically stronger and the faster fighter. He’s also the more versatile and better defensively. He has a number of ways he can win this fight. Angulo just has the one. But it’s a good one. And it’s the one he would probably choose every time anyway – turn up the heat and see who cracks first.

If Canelo suffers no hangover from the Mayweather bout, he should win this fight. If he’s going to stay a star in the sport, he has to win this fight. And if he belongs at the elite level, he will win this fight. Alfredo Angulo is there to test out all of that. It’s an honest test. There’s no trickery. Just a genuine gut check. I think Alvarez is tough enough to come through it, but he might have to go to a place he’s never been before to do it.

Duan and GG will be back Friday evening with a boxing podcast discussing this fight and all of the other big fights coming up.