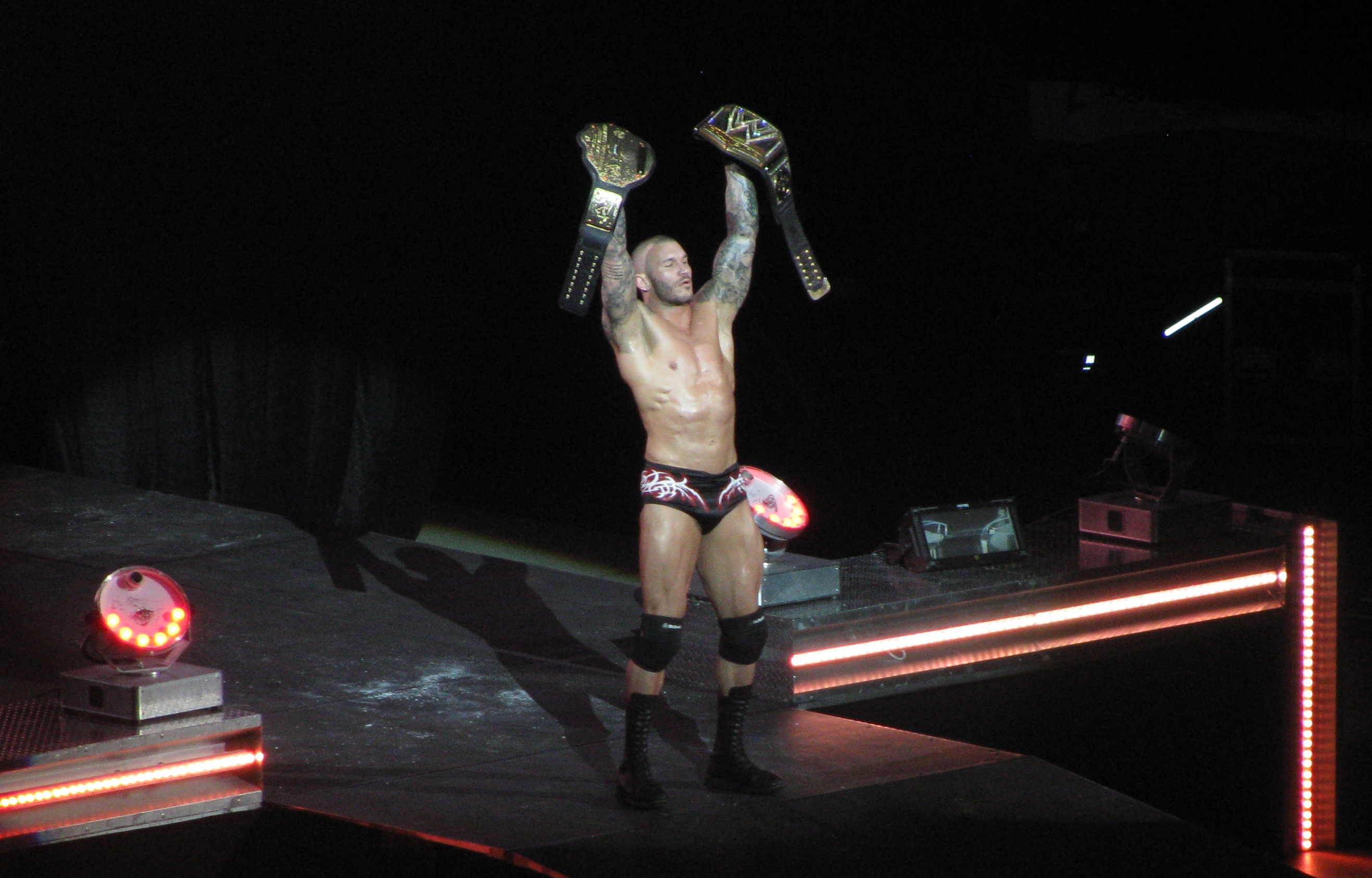 WWE hit their Bay Area house show swing on Saturday night with the second of two house shows. On Friday, one of their tours, headlined by John Cena vs. Randy Orton in a steel cage made its way to Oakland. The same crew hit San Jose on Saturday. The second crew featuring Daniel Bryan, the Shield, and Wyatts were in San Diego on Saturday.

Interestingly, Rey Mysterio who lives in San Diego was with the San Jose crew. He didn’t work in Oakland, making me think he was switching tours, but that was not the case.

I hadn’t been to a WWE house show in several years, usually waiting for a Raw, Smackdown, or PPV show before spending money on tickets. However, after seeing Raw and Smackdown in 2013 and feeling like both events were long and not at all geared toward making the live fans happy, I decided to go the house show route this time.

The last two WWE house shows I can remember going to were memorable, but for different reasons. In 2004, my buddy Edson was working at Gold’s Gym and Sylvan Grenier gave him tickets to the event. It was either the first or second meeting ever of Triple H vs. Goldberg. Of course, Triple H pinned him with his feet on the ropes.

Several years later, John Cena vs. Edge vs. Triple H was the main event and I remember it being a really fun main event. What I like most about house shows is that they’re fast moving and generally, all wrestling.

On Saturday night, it was mostly wrestling, but not necessarily fast moving. There was a 15-minute intermission so fans could buy merchandise after the first four matches. And then right before the main event, there was another five minute interlude so that they could put the cage together. Add that to matches that lacked heat entirely, and it was a pretty long night.

That’s not to say that it was a bad show because it wasn’t. But this crew is desperately low on star power save for the main event. Let’s put it this way: the match before the main event couldn’t have been called a semi-main as it featured Bad News Barrett vs. The Miz.

It opened with Big E Langston defending his Intercontinental Championship against Ryback and Fandango. This one was weird. I feel like Ryback has go-away heat on TV, but here, he was really good. He’s bigger than life and he does all the big muscle head mannerisms perfectly. When he and Langston faced off, it was fun. On the other hand, Fandango is a much better TV act than live act. His gyrations got over somewhat because it was the first match, but no one did the Fandango dance in the crowd. Langston won the match after giving Ryback the Big Ending. Fandango came off the top with the leg drop, but Big E moved and hit landed on Ryback. He then hit Fandango with the Big Ending. It was fun, moved fast, and hit hard.

Curtis Axel and Zack Ryder were the second match on the card. I nearly groaned before the match started because it seemed like such a throwaway match. But it worked, for whatever reason. The crowd wasn’t really into Ryder, but they were into hating Axel who played an excellent heel. There was a real life “Axel sucks” chant and he played into it well. The guy had real heat, which he almost never has on TV. I was happy for him as he looked like he was feeling good about it. He beat Ryder with the old Rick Rude neck breaker (sans hip gyrations).

Cameron and Aksana faced off next. Before the show, Justin Roberts was pimping a text/Twitter poll on what they should do together. Should they have a dance off or an actual match? Most everyone I saw was rooting for a dance off, but the match won. They were sloppy as all hell, but Cameron has some decent athleticism. I was hoping Naomi would come out at some point, but she didn’t seem to be there. Cameron won the match, but was jumped by Aksana and Alicia Foxx and had to fight them off. She did a little dancing of her own after the match was over. 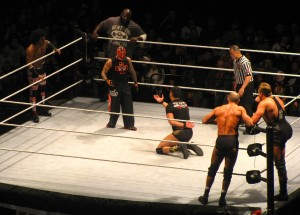 Zeb Colter came out and ran down San Jose in epic fashion. He introduced his tag team, the Real Americans and their partner, Alberto Del Rio. In Oakland, Del Rio was scheduled for a singles with Rey Mysterio, but instead, faced the Miz. In San Jose, they made it a six man tag and Xavier Woods, Mark Henry, and Mysterio were on the other side. This was a fun, old school tag team match where it was built around the hot tag and the babyfaces winning in the end. Del Rio tried to get Mysterio to shake his hand, but he wouldn’t. He shook the hands of his team to show Mysterio that he was trustworthy. Then Colter asked Mysterio if he was scared. Of course, Mysterio got the better of the dastardly Del Rio. It was fun to watch them take the time to sell it and interact right when the fans were ready for it. The good guys won in the end and after the match, Woods asked Mysterio and Henry to get back into the ring to dance. Woods has moves, though not quite like R-Truth. However, he asked Henry to do an R-Truth splits and Henry pretended like he was worried he’d blow his hamstring out if he did it before actually doing it. I was astonished. That was more impressive to me than pulling trucks.

After intermission, Darren Young and Titus O’Neil were in the ring, which meant the fans just figured it was an extended intermission. No one cared as neither character is over on TV. O’Neil is massive in person. I didn’t care about the match so took the time to walk around a bit, though I heard Young won. He pulled out a fan to do the millions of dollars dance.

The aforementioned Barrett vs. Miz match then took place. Miz played the babyface, pandering to San Jose saying that he and San Jose were both awesome. The match was totally fine. Miz did his babyface spots centered around the Figure Four, but Barrett beat him with the big elbow as Miz was coming off the top rope.

John Cena was insanely over with the crowd which was very much more a family oriented crowd. Lots of little kids who came to see John Cena wrestle. Even when some of the older kids and young adults tried to get negative Cena chants over, they didn’t last long. That’s not to say that there weren’t any boos as there were, but they weren’t overbearing. Orton was treated as a star, but not on a huge level. The kids knew he was the champ and Cena’s foil and treated him as such. 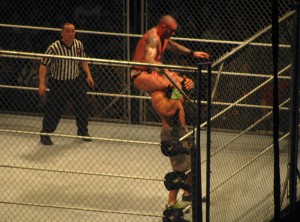 This was the best actual match on the card because they had time and pulled out most of the big spots. It was safe in some aspects in that you didn’t get an AA off the top rope or a superplex, but they did take some spills from the top rope to the mat since they both took shots at climbing over the top of the steal cage to win. Both men hit their finishing moves, but to two counts. At the end, Orton pushed Cena into the referee and then low blowed him. It allowed him to escape through the door and win the match, which really made the Cena kids unhappy. There was a little guy who couldn’t have been older than four rooting his heart out for John Cena. When Cena lost, he questioned the referee. I told him not to leave just yet as Cena would get him back. Orton came back into the cage with a chair, missed Cena, and then ate another AA before the show ended.

There were a few Yes chants that didn’t last long and one CM Punk chant that lasted even less. Before the show and during the intermission, they played commercials for the WWE Network. They were similar to the ones we’ve seen on Raw.

The upper deck was tarped off, but the bottom level was mostly filled. There were a few sections where the top three rows were missing people entirely, but outside of that, the rows were filled.

All in all, an enjoyable house show that lacked star power. It was pretty similar to the old C town shows that used to come around when you’d see Lanny Poffo and Steve Lombardi in non-squashes. You would see Jim Duggan vs. Ted DiBiase as the main event. Except, this one had Cena and Orton instead.

You can check out a few photos from the event on our FGB Facebook Page.