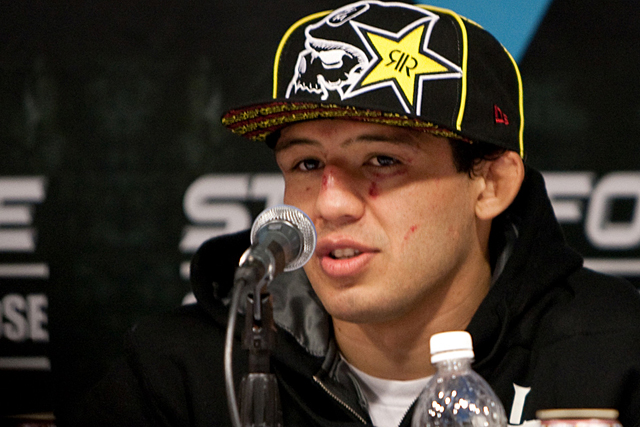 The UFC has matched the Bellator contract offer for Gilbert Melendez meaning that Melendez’s career with the UFC will continue.

Per the terms of the agreement, according to several sources, Melendez’s deal guarantees that at least 75 percent of the 31-year-old’s fights will be contested on pay-per-view moving forward. Additionally, income earned from Melendez’s contracted pay-per-view points will kick in at a lower minimum buy rate than for any contract in UFC history, meaning Melendez will still earn pay-per-view point earnings on an event that performs poorly at the box office.

Melendez will also earn pay-per-view income regardless of his placement on an event, i.e., regardless of whether he fights in the main event, co-main event or main card.

So get ready to see a lot more of Gilbert on PPV versus being on Fox. Since coming to the UFC, he’s had one fight on both.

Also, with the new deal, he’ll make a lot more money based on a PPV points deal that is the most generous in the company’s history. Let’s say that Ronda Rousey gets a small percentage of every buy that happens after they clear 300,000 buys. Gil’s deal would mean that his PPV points would kick in at lower than that. This is all speculation as I don’t know for sure what the number is when those points deals kick in. But if he were to be on a PPV that draws 700,000 buys, he’d be making a percentage on a lot of those buys.

And it seems like some only get a percentage if they’re the headliner or co-main eventer. In Gil’s case, it won’t matter according to Al-Shatti.

With Melendez back in the UFC, Dana White tweeted out a press release that states Melendez and Anthony Pettis will coach The Ultimate Fighter Season 20, which is also the same show that will create the new strawweight women’s division.

Per the press release, they will face-off after the conclusion of the show for the lightweight championship. Since the show begins airing in September, it’s likely that the fight would happen on the year-end show, much like the fight between Ronda Rousey and Miesha Tate did at UFC 168.