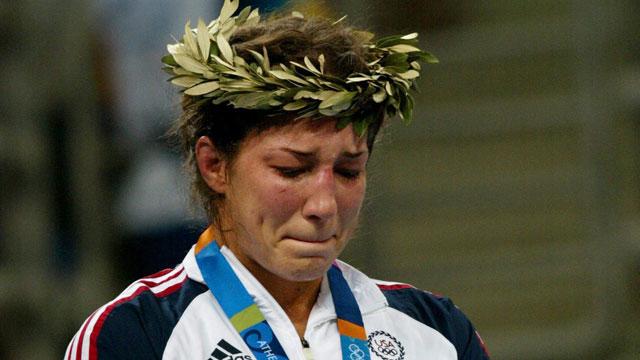 I will admit to writing this because I didn’t know a whole lot about Sara McMann. I knew that she was an silver medalist in wrestling at the 2004 Summer Olympics. And that she was probably the hottest female prospect in MMA and a possible heir to Ronda Rousey’s throne. But that was it. I’m glad I did the research.

But it wasn’t as heartbreaking as five years earlier when she lost her brother Jason, who got her into wrestling. He went missing for several months before his family found out that he was murdered by a classmate; a football player at his college, Lock Haven University. The murderer was convicted and sentenced to life in prison just a month after the Olympics, one that was dedicated to Jason’s memory by Sara.

And soon thereafter, the heartbreak would continue. McMann was in a car accident in which she and her boyfriend Steve Blackford were ejected from the vehicle. Blackford would pass away before help could come.

Today, nearly 10 years later, McMann has a daughter with Trent Goodale, head wrestling coach at Limestone. Goodale wrestled at Iowa and was a 2004 NCAA Division 1 qualifier.

The start of her professional career could be traced back to her high school wrestling career at McDowell High and then to the University of Minnesota Morris, before she moved onto Lock Haven University of Pennsylvania after her brother’s death, which was her brother’s school. Even though she didn’t win the gold in the 2004 Olympics, she’s still the first American woman to earn a silver medal in wrestling.

She wrestled all the way up until 2009, though failed to make the 2008 Olympic team, losing to Randi Miller at the US Olympic trials.

Her first MMA fight was a 1st round submission victory by rear naked choke over Christina Marks on May 28, 2011. She fought three more times in 2011, winning all three with only one going the distance. In her August 27, 2011 submission victory over Raquel Pa’aluhi, her submission of choice was the Americana.

She beat Hitomi Akano to start out 2012 before facing her toughest test yet, veteran Shayna Baszler. They fought at the second Invicta FC card in the main event in an excellent fight. Both women fought hard, yet McMann won a close unanimous decision.

In the fight, McMann showed her athletic ability, though didn’t use her wrestling much until the third round, probably for fear of Baszler’s submission game. She was aggressive in her striking and then wore Baszler down in the third round with wrestling before Baszler rocked her right before the final bell.

Later that fall, Invicta sent McMann to Strikeforce to face Liz Carmouche (the same Carmouche who faced Ronda Rousey in the very first UFC women’s fight). McMann was injured in training and had to pull out of the fight, further hurting the card that was supposed to feature Frank Mir vs. Daniel Cormier and was eventually cancelled.

McMann never actually fought under the Strikeforce umbrella, which was dissolved after its last card in January of 2013. In February of 2013, McMann officially signed with the UFC, though not before Dana White made mention of some female fighters (Miesha Tate and McMann included) not wanting to be Rousey’s opponent at UFC 157. McMann made some statements that a fight with Rousey needed the proper build up since she was a bit of an unknown, but never said publicly that she wouldn’t take the fight.

She fought under the UFC umbrella for the first time in late April at UFC 159, rag-dolling Sheila Gaff and finishing her with ground and pound in the first round. It’s viewable if you have UFC Fight Pass. 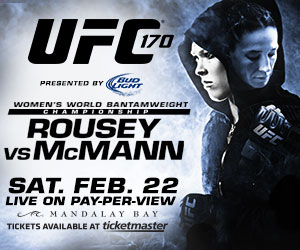 After the Gaff fight, McMann was scheduled to face Sarah Kaufmann in late August, but pulled out for undisclosed reasons. Later, she’d say simply that she had better things to do, leaving the reason why she had to pull out of fight as a mystery.

After Ronda Rousey beat Miesha Tate at UFC 168, it was announced that Rousey was fighting again soon and would headline UFC 170 in February against McMann in a battle of Olympic champions.

The rest is yet to be written.