This is the first WWE Network special and if it’s good, I think I might stay awhile and review the NXT shows. But for now, you can check out NXT arRIVAL play by play.

Triple H opens the show in the center of the ring to the crowd chants of “NXT!” Very happy to see that William Regal is part of the broadcast table. Regal was fantastic as a guest recently on Stone Cold Steve Austin’s podcast.

Great mix of styles between both guys. Cesaro is powerful and technical. Zayn is high flying and underdog-esque. Best spot early was Zayn and Cesaro on the outside and Zayn went do dive over the bottom rope in the corner and Cesaro threw a lethal uppercut.

Cesaro worked on the knee, doing leg drags. Zayn missed an enziguiri kick and Cesaro put him in a single crab.

Zayn fought the Giant Swing, but Cesaro got it and was swinging him fast. He then hit the uppercut in the corner. Zayn rolled him up out of nowhere after the pin attempt. Cesaro curb stomped his face.

Zayn turned a powerbomb attempt from the top rope into a Hurricanrana and then hit a running kick in the corner for a quick two count.

So many amazing counters in the match. Cesaro went for a powerbomb and Zayn turned it into the old Petey Williams flip pile driver. Cesaro hit Zayn with the uppercut where he launches him into the air first. Zayn kicked out at one and hulked up. Cesaro gave him another one and then hit the Neutralizer for the pinfall.

3. The Ascension vs. Too Cool

Hey, it’s Old School Raw all over again. The match is for the tag straps.

The Ascension kept Christopher in their corner for much of it until the hot tag to a now bald Scotty Too Hotty. During the very long precursor to the worm, Viktor pulled Scotty onto the top rope to clothesline him. Then Viktor Then they hit him with their finisher called the Fall Of Man. It featured Victor throwing a running spinning elbow while Konner leg whipped him.

Stephanie McMahon came out to say this is the first show ever streamed live on the WWE Network.

This is for the women’s NXT championship. Solidly worked match. Better than just about any of the WWE Divas matches.

Emma took a lot of the match, showing off a bunch of different submissions. At one point, Emma did a Batista Bomb and the crowd chanted, “Better than Batista.” That’s cold.

Paige hit her finisher, but Emma kicked out. She then put her into what Regal called a Scorpion Cross Lock. It looked like Edge’s old submission move and then she grabbed her arms like a chicken wing. Emma verbally submitted.

Paige hugged Emma after the match. Emma worked a much more serious match than her character allows in WWE. 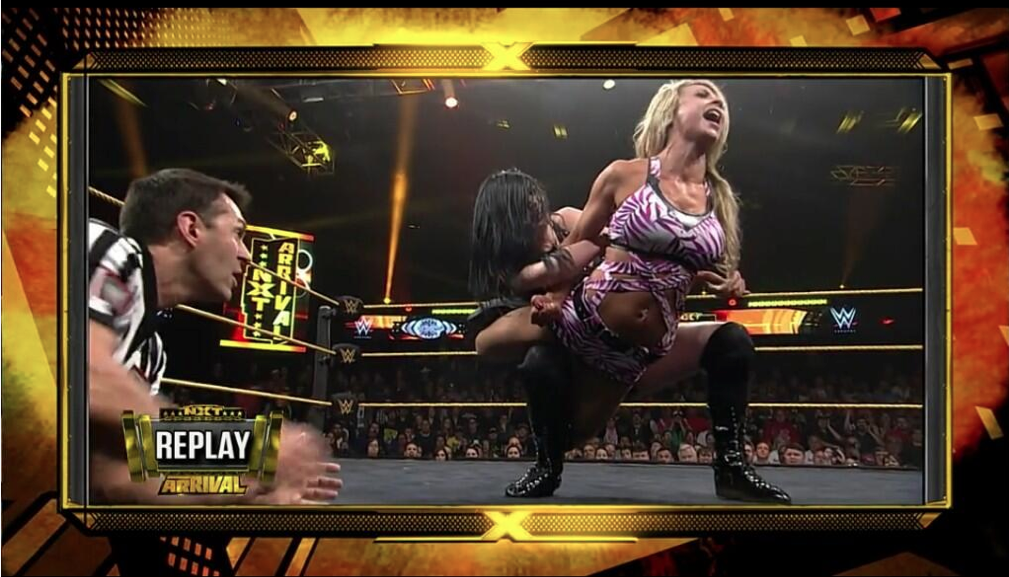 At this point, the stream died and I could never get back to this match. According to WWE.com, Alexander Rusev ran in and beat them both up. Maybe that sets up his first match on Raw or Smackdown.

It’s a ladder match for the strap.

Unfortunately, because of the WWE Network issues, I missed most of the match. Neville hit the corkscrew shooting star on Dallas who was laying on the ladder. He climbed up to win the strap.

For the stuff that I saw, I thought it was a fun show, but when the WWE Network cut out, it killed it for me. I didn’t get to see all of the main event, which looked like a fun match.

If this happens for WrestleMania, all hell will break loose.