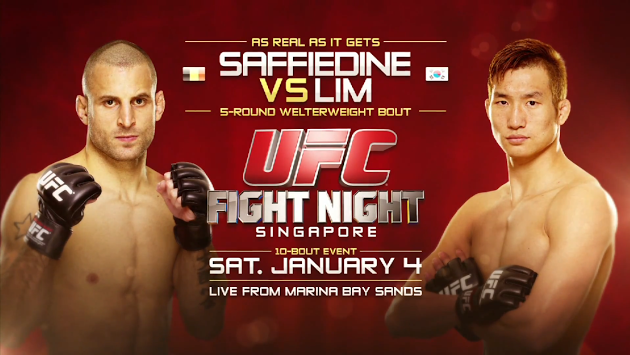 No, I didn’t stay up and watch the show, which would’ve been great, but I needed to be functional on Saturday. However, by doing so, I was able to check out how the UFC Fight Pass worked on a replay. Actually, replay is incorrect, as I believe I’m watching this show off the live feed, but I just rewound it to the beginning. I don’t know if the actual replay video will be edited in any way, but it looks like I’m watching what everyone saw live, just rewound.

I’m also using my Apple TV and the Airplay feature. The picture is rock solid. Jon Anik and Brian Stann are on the mic. The great Joel Martinez is the ring announcer.

Ho is much taller than Shimizu. He also looks to be much stronger. Shimizu wanted to keep the fight on the ground and Ho obliged and immediately put Shimizu into a triangle which turned into an arm bar. Then, the fight was paused because Ho was throwing Dusty Rhodes elbows from the top. The referee decided to take two points for some reason. I guess that was because he threw two elbows? The fight was paused again because of what looked like a grazing kick to the grapefruits of Shimizu. The referee looked at the replay and decided it didn’t connect and they were back to it. Without the points taken away, it’s a 10-9 round for Ho, but because of the point deductions, it’s a 9-8 round for Shimizu.

Ho was back on top in the mount so it looks like he’s going to get at least one of those two points back by winning this round. He hasn’t shied away from using the elbow either and is throwing it at more of an angle instead of up and down. He landed different types from the top before Shimizu reversed positions. Ho immediately transitioned back on top. He won the round.

Ho used judo to get Shimizu down and Ho is landing some huge shots from the top. Ho went from Shimizu’s guard throwing punches and elbows from the top to side control and then into his half guard where he put on an arm triangle for the submission win.

Winner: Kang Kyung Ho by way of 3rd round submission

There was a commercial for a resort in Singapore as well as one for a UFC training service. The latter looked more like a short informercial.

Elbows again? After a slow first, Dutra was pushed up against the fence and he threw three elbows right to the back of the head that dropped Kunimoto. Kunimoto couldn’t continue and Dutra was disqualified. Dutra cried out loud and started sobbing in the cage. He should watch the replay.

Kawajiri was dogged in trying to work for the takedown. Soriano is very athletic, but Kawajiri was relentless and took him down a couple of times. Soriano was backed against the cage and dropped elbows on Kawajiri, which is the story of this show so far, but they were clean. Kawajiri had Soriano’s back, trying to get the rear naked choke, but Soriano fought the choke. Tawajiri was mounted while Soriano was on his stomach and he was landing punches to the side of the head. Soriano turned over and took them to the face right as the round ended. Kawajiri wins it.

Kawakjiri get Soriano’s back again and choked him out. The referee didn’t see the choke initially and Soriano went to sleep. Yikes.

Lim is a giant. Saffiedine seemed to spend the round trying to figure out how to close the distance. Lim himself didn’t use the distance very well. Saffiedine was using his kicks to try and open things up. Lim caught his leg kicks twice and was able to get Saffiedine down, but not keep him there.

Saffiedine countered Lim’s long punches by timing it and landing a big overhand right. He did it a couple times in a row and they were the best punches of the fight. Saffiedine is landing his leg kicks as well. His round for sure.

Saffiedine threw a huge overhand right that didn’t look like it landed and Lim went down. Maybe he grazed him or Lim slipped. He also threw a switch kick that landed. Lim tried for a leg lock, but Saffiedine got out of it quickly. Saffiedine dropped Lim with a leg kick. He dropped him again with a leg kick and celebrated early and Lim was saved by the bell. I can’t imagine Lim’s going to last much longer.

Lim is trying to fight on one leg and he’s just throwing Hail Mary right hands. Saffiedine landed some huge flying knees. I’m not sure why this fight is still going on as Lim is taking a ton of punishment. The rest of the round was spent on the ground as they both scrambled for position. Saffiedine looked for a few chokes. Seemed like he’d be better justified getting it back on the feet.

It’s amazing that Lim is still out there. He’s got a ton of heart and is landing punches even though he’s on one leg. Saffiedine dropped him with another kick, but instead of going to the ground, made him get back up. Lim stuffed a takedown attempt and screamed. Saffiedine tried playing it safe but Lim exploded on him and rocked him right at the bell.