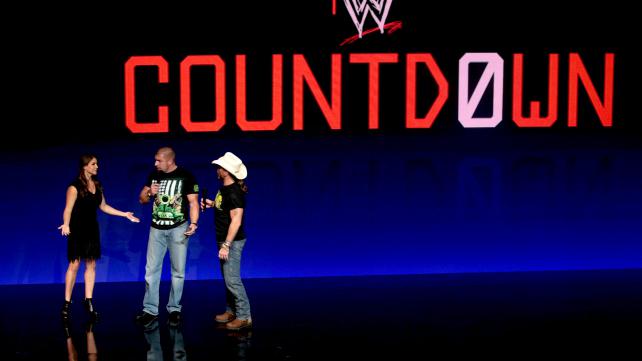 I think it (the WWE Network idea) pretty much shuts the door on PPV wrestling. If the biggest and best promotion isn’t running their most important shows on PPV, it will be nearly impossible for anybody else in the industry to go that route. And once they’ve done it, there’s no turning back. If this goes tits up, they can’t go back to the old model. They’ve now told everybody the value of these shows is $9.99 per month.

I think they did a fairly good job with their presentation. Hunter, Shawn and Stone Cold were engaging and funny, and I even have to say Steph was very good in her role. The parts with the marketing and office people didn’t really work. I’m sure they wanted to present a mix of fun and professional, but really bland business people trying to shill for a fun pro wrestling channel just comes off as awkward.

The interface does look genuine top quality with the interactive program guide and the ability to scale back through the schedule and pick out the programs you missed and so on. Combined with the on-demand library, it is a very cool little set up. For me, being able to choose from the 300 classic PPVs would be really cool. A lot of the time when we are just hanging around at home, we throw on an old WWF or WCW show from the 90s to leave on in the background, so to have the full catalog to choose from without any hassle would be handy.

I guess the thing that I found most surprising was the lack of progression as far as original programming is concerned. They have been mulling this over for months now and it’s all pretty much the same ideas they have been talking about since the very beginning and none of it seems sustainable long term. “Legends House” looks horrid and they will only be able to milk the concept for so long. “WrestleMania Rewind” sounds interesting, but then again there are only 30 WrestleManias – what do you do when they burn through them? Equally, how many countdown lists can you possible do? What about in a year’s time when all these ideas are played out? If it took them this long to come up with these few, I don’t hold much hope that there is going to be a major swell of new ideas over the next few months.

As I said, I think they did a good job with the pitch, but I’m not sure if good is good enough. I have a feeling it’s going to be hard to get people to sign up for a wrestling network. I think sense is on their side in that if you watch any wrestling at all, it probably makes sense to pay the ten bucks and have the option to watch any PPV live. I just wonder, for the people who buy maybe 2 or 3 shows a year when their friends are over, does the idea of owning a whole WWE channel seem a bit too intense/excessive? I think over here anyway, a lot of the more casual fans would find it a bit too wrestling nerdy to own the WWE Network. Maybe I’m wrong on this, but my gut feeling is that the idea of it will be way too hardcore for a lot of people.

And even if people do look at the package and think it’s good value, you still have to convince them to go through the process of signing up. A lot of people might think it sounds interesting, but never bother actually making the order. Getting sign ups is never easy. A million people is a seriously big ask. They have an uphill battle ahead.