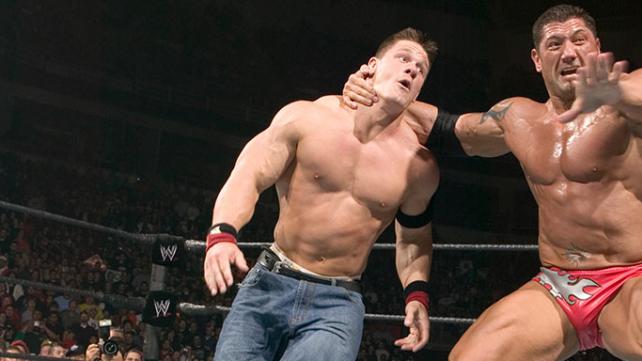 This Sunday is the 27th incarnation of the Royal Rumble. There seem to be only a few people who could possibly win, so I asked our FGB crew who they thought the Royal Rumble winner would be and why.

Here’s what they had to say:

Duan: Batista
It’s the obvious pick, but I have got to go with Batista. His comeback has gotten off to a pretty lukewarm start as it is. If they want to draw money with him, they can’t afford to cut his legs out from under him. Unless they have a massive WrestleMania program lined up to spin out of his elimination, he has to win. The only way of getting around it and not killing him, would be to spark a rivalry between him and Lesnar which costs them both the match, but I expect Brock has other plans in place for the months ahead.

Alan: Batista
I think Big Dave is a lock. I have no real problem with it either. Part of me thinks that Dave and Roman Reigns would be a really great final two. But I’m torn. On one hand I think it could be a cool past/future dynamic with Batista just getting the better of the up and comer but by hanging with him on such a level, Reigns gains tons from it and the fans see him as a bigger star. If this was Japan, that’s exactly how it would go. But the other part of me thinks that WWE fans would take that as Reigns failing and it would hurt him. Tough call, but I think I’d take the risk (with the hedging strategy of having Reigns eliminate a shit load of guys and look like a beast).

Cadillac Don: Batista
Who will win? Batista. Although I can see them starting a program with somebody else on the road to Mania, where Dave will feud with the person who throws him out. And that person, as Duan mentioned, would/could be Bork Lesnar.

Who should win? CM Punk. He’s entrant #1 and I have a huge hurkin’ soft spot for guys who draw #1.

Who should win, but isn’t listed as a competitor yet? Daniel Bryan. Yes. It would continue his storyline towards the title, and hey, may even finish that storyline he had with Trips and Orton.

Big D: Batista
I agree with what Duan said. Batista will win, ESPECIALLY after the 3.5 rating his segment did on Monday night. Dave moves the dial, at least on week 1, and as we’ve learned, week 1 doesn’t matter and week 3 does, but still – he moved it. So that cements it that he wins and will likely throw Alberto, whom I predict is getting the #30 spot, out. I’m still hoping for Brock/Batista somehow, but we’ll see how the cookie crumbles.

GG: Batista
I think there are four people who can win, but one person is higher than just about everyone combined and that’s Batista. The other three would be better actual stories if they won, but based on how the road to WrestleMania usually works, I can’t see them working out storyline-wise. CM Punk could enter number 1 and go all the way (and maybe he will until losing in the end) and I’d be totally fine with that. But if he’s being programmed with Triple H at WrestleMania, I’m not sure how they’d swerve that. Daniel Bryan (who isn’t even technically in the match yet) winning the Royal Rumble would be probably elicit the most cheer from the hardcores since Chris Benoit won in 2004 and the roof might get dislodged from the top of the building. But, I’m not sure we’re getting Daniel Bryan vs. Randy Orton again at WrestleMania, or Daniel Bryan vs. John Cena II since Vince McMahon said the first one wasn’t the right attraction. And then we have Roman Reigns who by the looks of it is the next big star. I think he gets over far more by being the guy who eliminates a ton rather than winning because if he won, could he really main event WrestleMania? I like Alan’s idea too.

I hope Big E gets a similar treatment and throws out a bunch of guys. Maybe he faces off with Reigns at some point one on one. I also hope Seth Rollins plays the role of the guy who just hangs on forever.

There you have it. We all think Batista is going to win. And if he doesn’t, it’s a swerve!