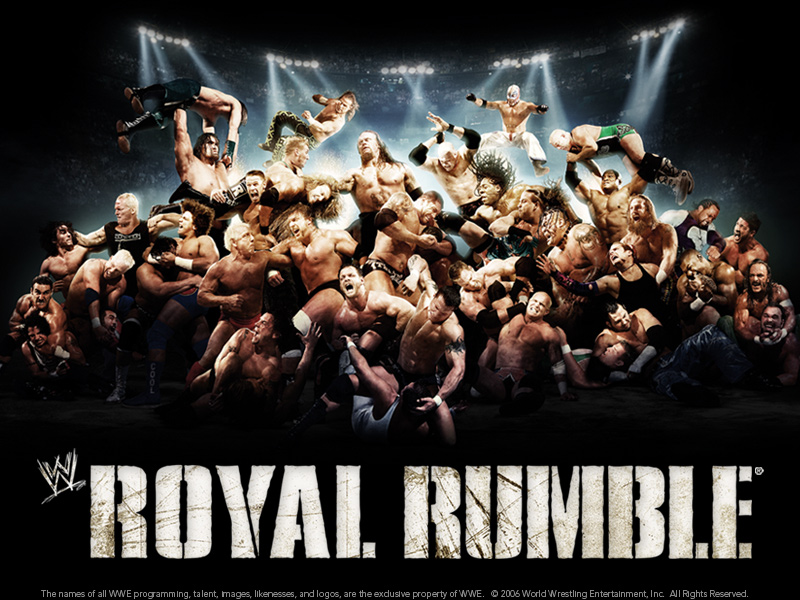 It’s my favorite PPV of the year. And I’m pumped.

Is anyone other than Dave Batista going to win the Royal Rumble? Will Daniel Bryan be involved? Can CM Punk go bell to bell? All those questions will be answered tonight.

Stay here for live play by play of the show.

A. New Age Outlaws vs. Cody Rhodes and Goldust

It’s 2014 and the New Age Outlaws are WWE Tag Team Champions. The match was a quick one. Cody Rhodes had to eat the FameAsser and got pinned.

It’s weird that the Outlaws in here rather than on Raw to maximize the eye balls. You’d imagine that they lose it fairly quickly.

Fairly slow throughout most of it. Bryan was on the offensive in the first third of the match before Wyatt took over. The crowd is very much into Bryan.

Wyatt did crab walk move where he crawls upside down from the corner into an avalanche in the corner.

At every point when the yes chant would get going, Bray would cut him off. Bryan hit a tornado DDT from the apron to the outside. He hit the drop kick from the top and the kicks for a two count. He hit two drop kicks into the corner and then was clotheslined out of his shoes.

Bryan put him in the LeBelle Lock and Wyatt bit his hand to get out of it. Wyatt rolled out of the ring to avoid the knee. Bryan did a dive through the ropes and Wyatt caught him in the Sister Abigail right into the barricade. He then did it again in the ring for the pin.

Really good match, but because of how over Bryan is with the crowd, the finish deflated the crowd.

Lesnar killed him with a chair before the bell.

Once the bell rang, Show punched Lesnar in the face but couldn’t get to pin him because he was so out of it. Lesnar recovered and hit the F5 and pinned him. He carried him for quite a while before hitting him with the F5.

GIF of the F5 from Fansided:

Lesnar continued to crush him with the chair after the match. The man is the 2014 version of Clubber Lang.

Match was really slow and the fans were impatient with it. There were Daniel Bryan, Y2J, and Macho Man Savage chants. Referee Charles Robinson went down and Cena put the STF on Orton and he tapped. But Robinson wasn’t there to see it. Orton hit Cena with the title for a two count. Cena came back with a FU for a two count. Crowd just chanted, “This is awful.” It’s not awful, but it’s not that great either.

Orton hit a RKO out of nowhere for a two count. They traded finishers like this was Rock vs. Cena all over again. The best was Cena getting air for his version of the RKO. Cena did a swinging DDT from the top and Orton looked like he face planted badly. He put him back in the STF and the Wyatts showed up. Orton hit the RKO and the match was over.

The Wyatts jumped Cena and left him laying and all the crowd wanted to chant was “Yes!”

There will be 90 seconds in between entrants.

Punk and Rollins look like they’ll go for a while. Kane was an early surprise, but Punk eliminated him quickly. Rusev was a surprise as well.

The Kofi spot this year was to be thrown over the top and into the arms of Rusev and placed him on the barricade. Kofi ran and jumped from the barricade to the apron. Impressive.

Nash came in and immediately threw out Jack Swagger. Everyone got dumped out so that it was the Shield against CM Punk. The return of Sheamus came in next. El Torito had some fun spots with the Shield and CM Punk. Antonio Cesaro did 27 revolutions with Seth Rollins with his Giant Swing.

JBL came out of retirement to be in the rumble. He was immediately dumped out. There’s going to be no Daniel Bryan in this match. The Shield are all still in as the 30th man enters.

Ambrose tried to dump out reigns. Rollins got mad at him. Cesaro tried to dump them both. Reigns dumped all three. Kane came out from under the ring and dumped out Punk.

Final three are Big Dave, Sheamus, and Reigns. Reigns dumped out Sheamus. Reigns tried dumping out Dave, but he reversed it.