This was the go-home show for the Royal Rumble. I wouldn’t say it was a fantastic go-home show, but they have the parts in place for a pretty good Royal Rumble show which was sold very well.

We wrote about this last night.

He also came out after Alberto Del Rio’s match and gave him spine buster and power bomb. Their feud is weak and won’t mean a darn thing so I’m not sure why they are doing it, outside of some loose connection Batista used to have with Rey Mysterio and that’s who Del Rio keeps beating.

But I don’t imagine this lasts long. It looks very much like the program is going to be Randy Orton vs. Batista.

CM Punk enters the Royal Rumble at number one.

Talk about another weak “feud”. Kane was forced to apologize for choke slamming CM Punk by Stephanie McMahon. Kane came out, apologized twice, and then Punk jumped him and sent him out of the ring.

Brad Maddox said Punk would have to face one of the New Age Outlaws. Billy Gunn lost rock/papers/scissors and had to face Punk and lost.

After the match, Kane said that all 30 Royal Rumble spots would be chosen at random except for Punk’s and Punk would enter the ring first. Let’s hope Bryan is in there soon there after. 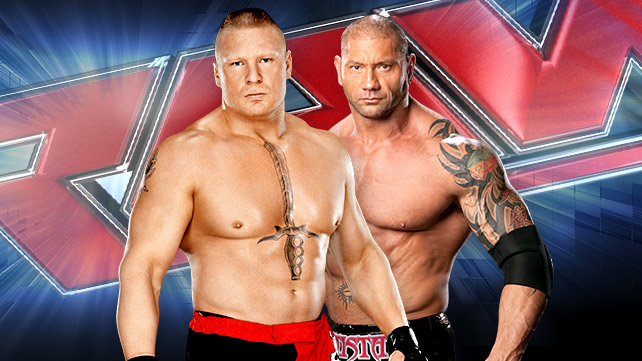 That was the photo that WWE.com used to promote the show online. Bad ass.

It made you wonder if they would eventually have the two behemoths meet up eventually. Instead, two other behemoths, Brock and Big Show will tangle on Sunday. While I didn’t like how it started because they’d spent the last few months killing the Big Show and cutting off his balls, both he and Brock have done a good job setting up the irresistible force/immovable object match.

Brock Lesnar took another big bump out of the ring and was angry, slamming chairs and ripping out monitors. He has taken two bumps for the Big Show and he’s put him over better in those two bumps than Triple H and company did in several months last year.

Daniel Bryan says it was a ruse.

Bryan came out to huge applause and made a crack at those who said he couldn’t be the face of the company.

He also said that he wanted to break Bray Wyatt down mentally and physically and waited for his opportunity to get Bray one on one. They will face off one on one at the Royal Rumble. Bray interrupted him and said Bryan flew back into society’s cage and everything from here on out would be Bryan’s fault.

– The New Age Outlaws will face the Rhodes bros in the kickoff match at the Royal Rumble. This couldn’t make the main card?

– The Shield beat Big E and the Rhodes bros in a good match. Nope, not tired of the Shield yet.

– For whatever reason, WWE didn’t upload the Mae Young tribute video on YouTube. But you can watch it on WWE.com. It’s excellent.

– After Batista powerbombed Del Rio, he hugged boxer Nonito Donaire who was in the front row.

– Cena interrupted the Kofi Kingston vs. Randy Orton rematch main event and sent Orton out of the building after a brawl. The segment was fine, but they just don’t have any magic. It was anticlimactic and Batista should’ve probably closed the show.