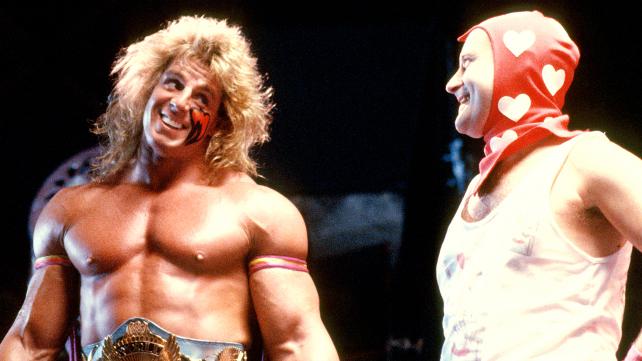 STAMFORD, Conn., January 13, 2014 – WWE (NYSE:WWE) announced today that The Ultimate Warrior will return to WWE after an 18 year absence and be inducted into the WWE Hall of Fame at a ceremony on Saturday, April 5, 2014 at New Orleans Arena, as a part of the WrestleMania® 30 festivities.

“The Ultimate Warrior was the most intense, colorful, competitive and outspoken Superstar in sports entertainment history, and his contributions to WWE were extraordinary,” said WWE Chairman & CEO Vince McMahon. “We are thrilled to induct The Ultimate Warrior into the WWE Hall of Fame.”

The Ultimate Warrior was one of the most iconic and exciting Superstars in WWE history. When the distinctive ring entrance music of Warrior hit, he would burst out of the dressing room and sprint towards the ring, causing a frenzy of excitement amongst WWE fans. Inside the squared circle, Warrior was responsible for many of the most memorable moments in WWE history.

In 1988 at the inaugural SummerSlam®, he defeated the Honkytonk Man™ in record time to win his first of two Intercontinental Championships. In 1990, Warrior defeated Hulk Hogan™ to become WWE Champion at WrestleMania® VI in one of the most exciting matches in WrestleMania history. Warrior would continue to captivate audiences around the world with epic encounters against WWE Legends such as Undertaker® and Randy Savage™. After a storied career that also saw him compete in WCW®, Warrior stepped away from the ring in 1998. Last year, he was featured in the WWE 2K14 video game as a downloadable character, giving the next generation of WWE fans a chance to “feel the power of the Ultimate Warrior.”

Additional WWE Hall of Fame Class of 2014 inductees will be announced over the coming weeks.

Tickets for the 2014 WWE Hall of Fame Induction Ceremony at New Orleans Arena go on sale this Saturday, January 18 at 11 AM ET/10 AM CT through www.ticketmaster.com or by calling 1-800-745-3000. All tickets are subject to service charges and facility fees.

WrestleMania 30 takes place at the Mercedes-Benz Superdome on Sunday, April 6 live on WWE Network. For more information on how to get WWE Network click here. WrestleMania 30 will also be available on pay-per-view. Check with your cable, satellite or telco provider for availability.

WWE, a publicly traded company (NYSE: WWE), is an integrated media organization and recognized leader in global entertainment. The company consists of a portfolio of businesses that create and deliver original content 52 weeks a year to a global audience. WWE is committed to family friendly entertainment on its television programming, pay-per-view, digital media and publishing platforms. WWE programming is broadcast in more than 150 countries and 30 languages and reaches more than 650 million homes worldwide. The company is headquartered in Stamford, Conn., with offices in New York, Los Angeles, London, Miami, Mumbai, Shanghai, Singapore, Munich and Tokyo.

Additional information on WWE (NYSE: WWE) can be found at wwe.com and corporate.wwe.com. For information on our global activities, go to http://www.wwe.com/worldwide/.

Forward-Looking Statements: This press release contains forward-looking statements pursuant to the safe harbor provisions of the Securities Litigation Reform Act of 1995, which are subject to various risks and uncertainties. These risks and uncertainties include, without limitation, risks relating to entering into, maintaining and renewing key agreements, including television and pay-per-view programming and our new network distribution agreements; the need for continually developing creative and entertaining programming; the continued importance of key performers and the services of Vincent McMahon; the conditions of the markets in which we compete and acceptance of the Company’s brands, media and merchandise within those markets; our exposure to bad debt risk; uncertainties relating to regulatory and litigation matters; risks resulting from the highly competitive nature of our markets; uncertainties associated with international markets; the importance of protecting our intellectual property and complying with the intellectual property rights of others; risks associated with producing and travelling to and from our large live events, both domestically and internationally; the risk of accidents or injuries during our physically demanding events; risks relating to our film business; risks relating to increasing content production for distribution on various platforms, including the network; risks relating to new businesses generally and risks specific to the new network; risks relating to our computer systems and online operations; risks relating to the large number of shares of common stock controlled by members of the McMahon family and the possibility of the sale of their stock by the McMahons or the perception of the possibility of such sales; the relatively small public float of our stock; and other risks and factors set forth from time to time in Company filings with the Securities and Exchange Commission. Actual results could differ materially from those currently expected or anticipated. In addition, our dividend is dependent on a number of factors, including, among other things, our liquidity and historical and projected cash flow, strategic plan (including alternative uses of capital), our financial results and condition, contractual and legal restrictions on the payment of dividends, general economic and competitive conditions and such other factors as our Board of Directors may consider relevant.