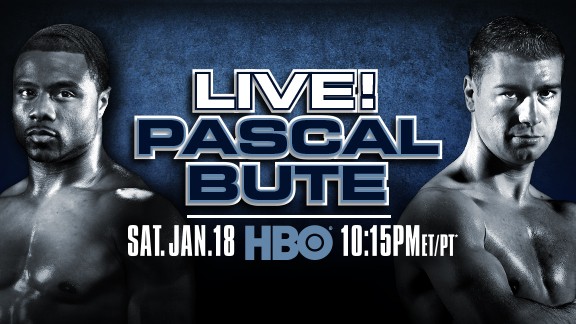 It’s our first big fight of 2014 and I imagine the crowd is going to be alive.

The fight is from the Bell Centre in Montreal and being that both fighters are from Canada, the hometown crowd should provide quite the ambiance for the fight. It sounds like Lucian Bute may be a bit more popular than Jean Pascal tonight.

Pascal Vs. Bute Play By Play

Bute is holding his left right near his chin. Pascal threw a right hand and Bute immediately followed with a short left. Pascal’s hands are low and loose. Pascal wins the round mostly for body punches. Both started jabbing late.

It was another slow round until Pascal landed a big right head. He shook Bute a bit and more than anything, just made him look bad at handling pressure.

Bute landed some shots and seems to be handling Pascal’s wild swinging. I’d still give it slightly to Pascal for landing the stronger punches, but not by a big difference. Bute is looking better.

One of the things that is clear so far is that when Bute lands, he seems to expect Pascal to feel his shot and he waits a bit. But Pascal is throwing back immediately as if the punch isn’t effecting him. That’s where the size difference is a big deal. Pascal won the round for a late flurry. The only clear round has been the second so far.

Kind of the same song. Bute is looking more comfortable. If he can hang in there, Pascal will get tired first. But he’s not doing enough. Pascal is doing just enough.

Bute is keeping his distance and trying to land his jab. But Pascal is still winning just about every round, albeit closely. Neither guy is impressive. But Bute is the lesser of two unimpressive fighters.

Pascal’s unconventional style is helping him. He dives in wildly. Bute covers himself up as if he expects to be head-butted, and Pascal lands a right hand that Bute doesn’t see coming. If only Pascal was more active. Bute closed decently, but didn’t really land anything hard.

Pascal put Bute down, but the referee called it a slip. It seemed to irritate Pascal who lit Bute up at the end of the round. It seems that if he wants to, he can land the right hand at will, but he’s not interested in throwing it all the time.

This round had sparring all over it. It’s what it looked like. Pascal threw two hooks at the same time and landed them both. Bute looked like he had no idea what was going on. And then Pascal landed again. This is a weird fight. Boring fight too.

Bute has a cut right in the middle of his forehead. Bute came on late in the round and landed several punches in a row. His only hope is to continue throwing and hope Pascal’s become tired.

Pascal took a lot of the round off and let Bute pile on some punches. He then unleashed the worst flurry of punches ever, many of which missed and Bute kept control.

More nuttiness from Pascal who continued to take shots and not throw them and then in a rage throw a ton of them. This is Bute’s best round and Pascal has some of the worst strategy ever. I can see Bute winning 4 rounds here. Anything more and I’d be surprised.