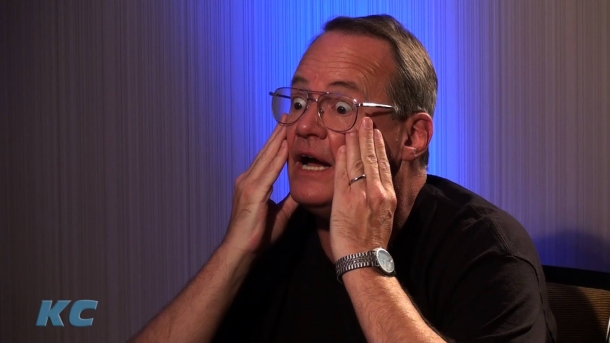 Kayfabe Commentaries and Jim Cornette have squashed their beef and popped out a brand new release in their “Breaking Kayfabe” shoot interview series titled Breaking Kayfabe With Jim Cornette. Cornette joins Sean Oliver as Sean attempts to pick his brain on a number of issues that the fans have wondered since Cornette left the business one year ago. What happened with TNA? What happened with ROH? This release attempts to answer those questions.

Naturally, with 90% of these types of releases, they’re not meant for the casual fan. This is strictly for super hardcore fans who want to know the ins and outs of the business, specifically the story of Cornette’s breakup with the wrestling business he loved his entire life. With the “Breaking Kayfabe” series, Sean Oliver is much more thorough and aggressive with his questions, even going so far as to ask Jim Cornette if he thinks he has legitimate anger issues. Oliver isn’t afraid to call out Cornette when the time is right.

Sick of hearing about Vince Russo? Well too bad. The interview clocks in at about two and a half hours and the first forty minutes are all about Vinnie Ru and Cornette’s departure from TNA. Unfortunately for fans of the MLW Radio Podcast, this is essentially a retelling of the story told on there with a few extra details. His ordeals with Dixie Carter, Terry Taylor, and Vince Russo and the event leading to his departure from the company are covered in detail.

After that, the interview really kicks into high gear as Corny goes off on a very passionate and very intelligent diatribe about the death of the wrestling business and his honest belief that we will never see another boom period again. Oliver is much more optomistic about the business being cyclical and the possibility of a resurgence in popularity, but Corny sticks to his guns and makes a number of very valid points about the history of pro wrestling and the damage done in the past decade.

For the majority of the rest of the interview, Cornette breaks down the entire debacle with Ring of Honor, starting with his initial love of the company’s potential and finishing with a Ring of Honor TV Taping in freezing cold Pittsburgh, PA that was more of a mess backstage than a Guns N Roses concert from 1992. This story was so embarrassing that I’m certain when people within ROH hear it, they won’t be happy.

Even though Cornette often comes off like a crazy person (and its no different with this DVD), you really feel him and the spot that he was put in by Ring of Honor and can’t blame him for wanting to choke people. The issues with the failure of Ring of Honor’s iPPVs is covered, including one embarrassing story that made Ring of Honor sound more like an episode of the “Three Stooges” than a wrestling promotion owned by a major television network. There’s one moment on the shoot where Cornette legitimately has a meltdown and his face turns red because Ring of Honor decided to astronomically raise ticket prices for a show and when Cornette tried to argue that it was a bad idea to raise the prices considering they fucked the fans over enough times, he was told they wanted to be like the Ringling Brothers. “It was cheaper to get into fucking Smackdown”.

Cornette says very nice things about Sinclair’s Joe Koff (despite Cornette frequently mentioning the fact that Sinclair Broadcasting was frugal with spending money when they needed to), booker Hunter “Delirious” Johnson, former booker Adam Pearce, and all of the talent. He says the opposite about others.

Ross Abrams, the “merchandise weasel” as Cornette calls him, gets buried six feet under by the Louisville Slugger. Former NWA promoter Gary Juster plays the part of Judas in Cornette’s side of the story. The biggest antagonist of the agenda, according to Jim, was 26 year-old “Greg The Office Boy”, a kid hand picked by Joe Koff to run the company who treated everybody poorly, ran off two ring crews, and almost got knocked out by Charlie Haas, Ernie Osirus, AND Cornette. He thought he knew the business despite only visibly seeing his first pro wrestler six months before getting the job. Jim doesn’t quite hate him as much as Vince Russo, but you get the feeling he would be on equal footing with Vinnie Ru had Cornette and ROH not parted ways. These stories may shed some light for some on why Ring of Honor is as “popular as crotch rot” (his words, not mine).

Even though this DVD is targeted towards a niche of a niche of a NICHE, I had fun watching it. Cornette’s rants became very monotonous a few years ago, but now with after a year off and a bucketload of new stories, I can enjoy this and I did. If you’re a fan of Cornette’s rants, want to learn about the inside of the Ring of Honor business during the Sinclair era, and if you are unaware of what led to Cornette leaving TNA – this is for you. You can watch it on WWNLive.com or pick up the 2-disc DVD over at KayfabeCommentaries.com.