Skip to content
It’s time for our final awards of 2013. If you missed them, check out the boxing and pro wrestling awards.

Check out our MMA awards:

Duan: Chris Weidman
Chris Weidman twice beat the best fighter in the history of mixed martial arts. That’s something impossible to discredit. In 2013, he broke through to the sport’s elite level and I’m not sure the same can be said of any other fighter.

Alan: Cain Velasquez
He looked like an unbeatable monster in his fights this year (and his one fight at the very end of last year). I don’t see anyone beating this guy anytime soon.

Big D: Chris Weidman
Beat Anderson Silva two times, one by knockout and one by strategic leg defense that shattered a bone. Yeah… nobody tops this in 2013.

GG: Cain Velasquez
No one fighter dominated his fights as savagely as Velasquez did in 2013. I lean Velasquez over Weidman only because of the way he won his fights (and I might rank Rousey number two). I think Cain is actually underrated when it comes to pound for pound ranking. He’s a beast.

Duan: UFC on Fuel 8
It featured two of the most intense and dramatic fights and finishes this year back-to-back in the main event and co-main. In an era where the product is way overexposed and nothing really stands out anymore, this one certainly did. Wanderlei Silva and Mark Hunt’s wins felt like they mattered more than many title bouts.

Alan: UFC 166
I just absolutely loved that Diego/Melendez fight and it was underneath a main event with epic feel. Lots of other fun stuff littered throughout the show as well.

Big D: UFC 166
Velasquez vs. JDS III, Gilbert vs. Diego, Gonzaga and Dodson smashing cats, and my Cuban countryman Hector Lombard murdering Nate Marquardt make this the BEST and most FUN SHOW of the year!

GG: UFC 167
The UFC really ended the year with a bang. You could’ve taken either of the last three main cards of the year and I wouldn’t have argued. And then, as Duan showed, there were cards not on PPV that actually meant something. For some reason, UFC 167 was the favorite of the year for me.

I think some of it had to do with the fact that all of my plans had fallen through to see the show and then at the last minute, I ordered it myself and as able to watch the entire thing without distraction. I think we had a feeling that Hendricks was GSP’s biggest contender and he fought a tremendous fight, even though he didn’t get the decision from the judges. The fight felt big and the card underneath delivered.

Duan: Wanderlei Silva vs. Brian Stann at UFC On Fuel 8
Wanderlei Silva returned to the Saitama Super Arena and for one night, he was able to tear up the form book and give us one last spectacular performance. This should have been the great man’s farewell to the sport. It won’t be though.

Alan: Diego Sanchez vs. Gilbert Melendez at UFC 166
As a fight, this was great. As a drama and the story of a man having perhaps the strongest will on earth, this was epic. Diego’s face going into that third round… I’ll never forget it as long as I live. 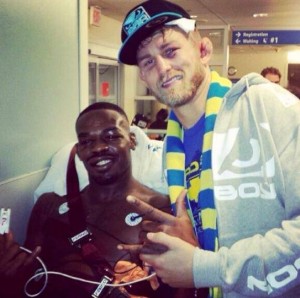 Amazing heat. Amazing heel work. Amazing Judo. Amazing will by Miesha. This was just amazing. I actually feel this fight legitimized women’s MMA in a lot of people’s eyes. I know a few of my friends were sold afterwards.

GG: Jon Jones vs. Alexander Gustafsson at UFC 165
We knew Jones was great. What we didn’t know is how deep he could dig. And thanks to Alexander The Great, we know now. Both men took a ridiculous amount of punishment, but neither gave in. At the end, both men resembled Rocky Balboa and Apollo Creed at the hospital in the first Rocky sequel. Jones’ hand was deservedly raised, but Gustafsson made him earn it.

Duan: Vitaly Minakov
The heavyweight division is super light at the moment with few fresh challengers. The Bellator champ ends the year at 13-0 having breezed past all his competition to date. His background in Judo and Sambo differentiates him from what’s out there at maximum weight in UFC, and should that call comes from Zuffa, I think Minakov is ready to answer it.

Big D: Cat Zingano
She beats Ronda and sends her packing. Trust me.

GG: Khabib Nurmagomedov
Yes, I had to look up how to spell his name. Much like Duan’s pick, Minakov, Nurmagomedov’s background is in Judo and Sambo. He’s 5-0 so far in his UFC run, and he’s slowly climbed the ranks into the top 10 of the lightweight division. By late 2014, he could be a contender for the title. It looked like he was going to be matched against Gilbert Melendez early in 2014, which would’ve been the ultimate test for the young fighter, but that was put on the back burner. Maybe they should save Gilbert for a number one contender’s fight.