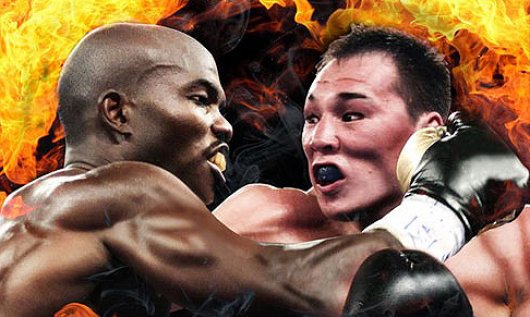 With the new year now upon us, it’s time to look back at 2013. We’ll take a look at the best in boxing, pro wrestling, and MMA.

First up is boxing, which had a really good year when it came to building up new fighters, showcasing their best, and creating interesting fights for 2014. The 2014 Breakthrough Star is all about who we think makes that big jump in 2014.

Joining Duan and I for our year end boxing awards is Robert Silva (@ROBERTSILVA5768) from Big D’s website, Superfriends Universe. Robert’s most recent podcast goes over some of the awards we talk about below, as well as more. You can listen on his BlogTalk Radio page.

Boxer Of The Year

Duan: Timothy Bradley
For me, there is more that goes into boxer of the year than just in ring performance; there’s also the story that goes along with it. Timothy Bradley started 2013 as an undefeated champion, but he was also frozen out of major fights with few career options. A brutal and enthralling battle with Provodnikov showed his guts and toughness, while a perfectly measured performance against Marquez showed his astute boxing brilliance. Those two fights gave Tim the breakthrough that looked like it was never coming. This was the year Tim Bradley stopped being just a high level boxer and became a genuine star in the sport.

Robert: Danny Garcia
Two years ago, when I first started doing the World Championship Boxing podcast, I predicted that Danny Garcia would be the next big star in boxing. He’s good looking, young, Latino and a talented fighter with a ton of heart and courage. This year was his breakout year. He made me look like a genius. After destroying Erik Morales and Amir Khan last year, Garcia had the two most impressive wins of any fighter this year. His 12-round decision over Zab Judah this past April and his workmanlike decision over Lucas Matthysse showed a discipline beyond his age.

I attended the Judah fight and sat among a bunch of idiotic Judah fans. They stayed silent for 12 rounds as Garcia piled up points, out-boxing the dangerous but over-matched Judah. He rocked Judah several times and won 7 of the first 8 rounds. While Judah rallied late, it was too insurmountable of a lead to overcome. Garcia won a decisive, unanimous decision. Then came the Matthysse fight.

Matthysse was a huge favorite and Garcia was all but counted out before the fight commenced. Garcia put on a technical masterpiece, both out-boxing and out-slugging the Argentine slugger. He culminated his biggest victory by decking Matthysse in the 11th, and closing his eye. Another decisive, unanimous decision for the Philadelphia fighter of Puerto Rican heritage.

GG: Floyd Mayweather
There have been years recently when people claimed Floyd Mayweather to be boxer of the year where he probably doesn’t deserve it. You can’t really win boxer of the year by fighting only once. But he didn’t fight just once in 2013. He fought twice. And he didn’t just win, he completely out-classed two really good fighters. While he was favored to beat both Robert Guerrero and Canelo Alvarez, the eye-opening part of what he did was completely strip them of what they do well. Guerrero is a volume puncher who couldn’t land punches. Canelo is a big hitter who couldn’t come anywhere near Mayweather with big shots. While I love what both Bradley and Garcia did, I had to choose Mayweather. He was greatness personified.

GG: Timothy Bradley vs. Ruslan Provodnikov
The only negative part of this fight is that it took me so long to watched the full version. Duan told me about it when it happened as I wasn’t able to see it when it aired. And then during the Bradley vs. Juan Manuel Marquez build-up, I saw bits and pieces of what looked like a brutal bout. Before doing the awards, I wanted to watch it since I’d heard nothing but great things and I wasn’t disappointed. From Bradley’s heart and ability to take punishment to Provodnikov’s Rocky-like move forward style, it was the perfect potion for a great fight (which I had as a draw by the way). Like Duan said, both guys are helped by the fight and I can’t wait to see what both guys do in 2014.

Duan: Vasyl Lomachenko
Lomachenko will attempt to take a world title in just his second pro fight early next year. If he’s successful, he will have done something nearly unheard of in the sport and it will be a major news item. With a much more viewer friendly fighting style than other notable celebrated amateurs, and the backing of both Top Rank and HBO, he will have every opportunity to have that breakout year.

Robert: Keith Thurman
The 147-pound Welterweight division is stacked with a plethora of talent. They have 3 of the top 10 fighters in the world (Mayweather, Bradley, Pacquaio) and several strong, outstanding fighters. Among these fighters, one, in my opinion, stands out as a future star: 25 year old Keith Thurman.

In 2013, Thurman showed many of the attributes needed for a future star. On July 27, he was put to the test by another young prospect, Diego Chaves. After surviving Chaves’ early onslaught, Thurman took control in the middle rounds and pummeled his Argentinian opponent into submission in the 10th round. Just a few weeks ago, in his toughest outing to date, Thurman totally dominated Jesus Soto-Karass, putting him away in the 9th round. In the Soto-Karass fight, Thurman utilized a razor like left jab, a weapon needed in the talent laden welterweight division. He kept Soto-Karass at bay throughout the fight with the jab, and punctuated the dominant performance by landing several hellacious right crosses in the 9th and final round. ‘

In my opinion, Thurman has all the goods to be the next great welterweight after the old guard steps down. Eventually, look for a superfight down the line with my fighter of the year, Danny Garcia.

GG: Ruslan Provodnikov
Some may argue that Provodnikov may have been the 2013 Breakthrough Star and I don’t think I’d argue. But after going toe=to-toe with Timothy Bradley and beating Mike Alvarado, Provodnikov is a marketable asset. He has the style that is must-watch and while supremely confident in his abilities, he’s as happy-go-lucky as they come. We could see him fight Brandon Rios and maybe even Manny Pacquiao. And if he gets Pacquiao, he’ll become a near-household boxing name.