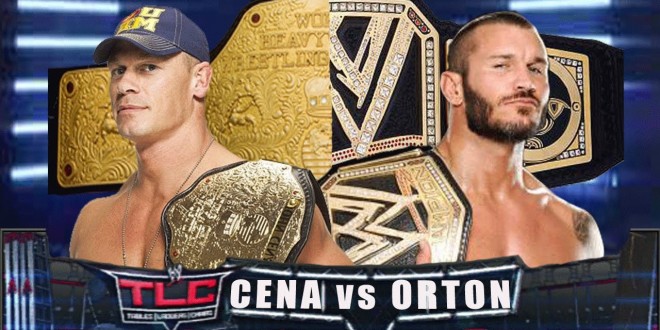 After the stench of the post-Summer Slam WWE booking, will a great wrestling match with a clean pin deciding who is the ultimate Unified champion be enough for fans? Or has WWE’s terrible on/off booking with Daniel Bryan turned this entire Authority angle sour? And after conning your audience for PPV after PPV, if you build a successful, though really quick angle to close out the year, are you crying wolf, or will your WWE fans come back like sheep?

Those are all questions that may or may not be answered at WWE’s final PPV of the year, TLC. TLC generally promises solid action based on the style of PPV. Though, unless more matches get added with last minute stipulations, the only match with any tables, ladders, or chairs (Oh my!) will be the main event between John Cena and Randy Orton.

While it would be great if there was a several month build set to climax at TLC (or better yet, WrestleMania), at this point in 2013 with WWE, you take what you can get.

Here is the way WWE PPVs have ended since Money In The Bank:

In the last five PPVs, the main event has either ended in a fuck finish, some sort of interference, or had the result changed the next day. I don’t think I would be remiss to say that fans haven’t gotten their money back on PPVs since SummerSlam.

So what has changed? In the last few weeks, there has been a push to unify the WWE and World Championships. However, because of how dishonest the product has been, no one believed it. Triple H has had to state over and over again that the goal is to have one champion. And some still don’t believe him. I do, but I have a feeling fans will feel ripped off again when it’s all said and done.

Based on the recent Paranoid Randy Orton character, which has been wildly entertaining even though it makes him look week, I have a feeling that by Monday, we’re going to see that this was a big plan. Triple H didn’t want to just unify the championship. He wanted the Authority to be in charge of the Unified championship. I smell Triple H screwing John Cena in the match somehow and Randy Orton winning. And then they’ll all hug and it will be proven that Paranoid Randy Orton was just a joke on good old John Cena, setting up a WrestleMania rematch between John Cena and Triple H.

And then we’ll feel like we were hosed again. And why wouldn’t we? After this stretch of PPVs, they’ve reconditioned us. The only way to get that back is to book strongly again. And they do have time to do that before WrestleMania.

As for the other matches, I don’t see how it makes any sense if Daniel Bryan or CM Punk beat the Wyatts or the Shield in their handicap matches. And if they do, good luck having anyone take either group seriously.

The new tag team title match created on Smackdown is a four-way and for some reason, the Usos aren’t in the match. It would make sense if the Real Americans won the title if only to set up Cody Rhodes and Goldust to get the titles back. And I don’t think Big Show and Rey Mysterio will win it quite yet. But, if they want to set up the Cody and Goldust turn, they could start that here and Show and Mysterio could actually win it. I predict Cody and Goldust keep them just to make that angle stronger. They could do the turn at Royal Rumble if they do it.

Big E should keep his Intercontinental Championship and it might be time for Natalya to beat AJ Lee.