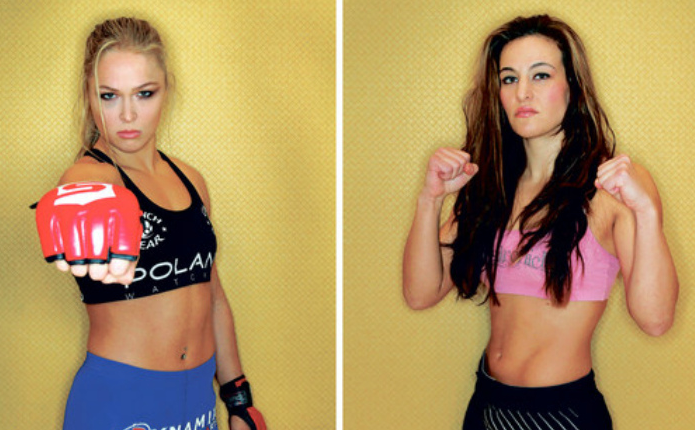 Rather than our usual one post preview, we decided to split our preview into two posts. The Anderson Silva vs. Chris Weidman portion will come a bit later.

Because both this fight, Ronda Rousey vs. Miesha Tate, and the actual main event could headline a show, they each deserved their own post. With seemingly a million shows in 2014 all needing main events, we might not see cards of his caliber too often, or at all, next year. This is a big one.

The first thing to bring up before talking about the Ronda Rousey vs. Miesha Tate is their first fight. Rousey beat Tate in a fast-paced battle that ended gruesomely for Tate. After that fight, I’m not sure anyone thought they’d need to fight again. But thanks to Cat Zingano’s injury, Miesha was able to get a rematch with Ronda in a fight that is the most high profile yet for women’s MMA.

While some may scoff at whether or not Miesha has a chance, like Ronda says, she is in the fight because they hate each other for real. Ronda also said it’s because Miesha had a nice ass, but hey, who’s looking? If you watched The Ultimate Fighter, you saw that hate weekly. Ronda would be angry with tears when Miesha upset her and Miesha would roll her eyes when Ronda flipped her off. They deal with it differently, but you can tell they bother the hell out of each other.

So it comes down to this; does Miesha Tate stand a chance in the octagon with Ronda Rousey? Or will we see another one-sided affair. The FGB crew along with Heidi Fang (@HeidiFang) from MMA Fight Corner, Alex Goff (@AlexGoff84) from Online World Of Wrestling, and Steve Juon (@AngryMarks) from Angry Marks check in with their thoughts and predictions for the fight.

Heidi: Rousey by 1st round submission
I would’ve given Miesha Tate a much more solid chance had I not witnessed her body language at Thursday’s pre-fight press conference. She was often fidgeting, slouching and postured in such a way that made me believe she’s starting to wonder whether or not she can last against Rousey. I do think Ronda is a world class athlete and the UFC’s ‘It’ girl because she is the complete package. The package comes with the ability to arm bar anyone in the world, rival or not, as soon as the opening presents itself.

Alex: Rousey by 1st round submission
In 1997 we saw Frank Shamrock defeat Olympic Gold Medalist Kevin Jackson quickly with a submission. Olympians are not some class of athlete that is unstoppable or unbeatable by us mere mortals. Miesha Tate is well rounded enough to beat the best women in the sport on any given night. Ronda Rousey isn’t a normal woman. Her upbringing is portrayed as being a mess. Longing for a father that left her life too early and having an obsessed mother who skirts the line of being abusive. That combination created what became the first American female judoka to medal in Olympic history. That is why Ronda shouldn’t be mentioned in the same breath with some of her counterparts. Miesha isn’t Frank Shamrock and Ronda isn’t Kevin Jackson.

Steve: Rousey by 1st round submission
Ronda Rousey arm bars Miesha Tate (again) in the first round (again). This isn’t even close. She will HUMBLE Tate. I like Miesha Tate and always have, but the last fight proved that Rousey is a bad style match-up for her. That hasn’t changed.

Duan: Rousey by 1st round submission
Unless there is some major shift in the dynamic, rematches usually give you the same result only magnified. Tate hasn’t shown the type of improvement since the first fight that suggests she has a real shot here. Nor has there been enough time between then and now that makes it feel anything significant could have really changed. I think a Rousey win here is about as close to a lock as you will get at title level in UFC, and I think it will probably come early too.

GG: Rousey by 2nd round submission
During their first fight, Tate rushed at Rousey and was swinging wildly. I’m not sure if she was even looking. She said she wouldn’t be so aggressive this time around. But I wonder if swinging wildly was actually her best chance? By being more strategic, she may extend the fight into the second round like I predicted, but I think her best chance is by landing a big shot and following up. I obviously don’t think it happens. It’s tap or severe dislocation on Saturday night.