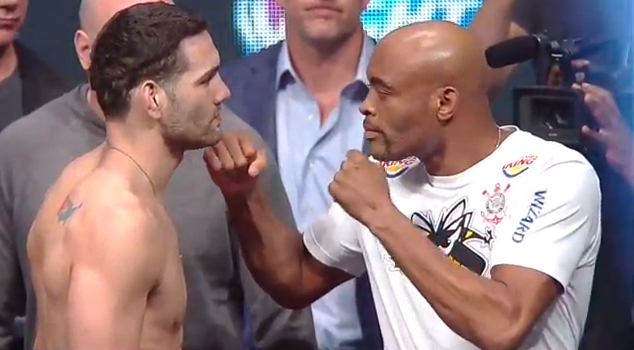 It’s the biggest show of the year. Brock Lesnar of all people is supposed to be in attendance. Where’s the Undertaker and Ariel Helwani when you need them?

Let’s get it started with the UFC 168 play by play:

Brandao came out fast and strong as usual, but half way through the round, he looked to tire out. Poirier landed a nice looping uppercut. Brandoa landed a nice over the top right hand. Diego switched stances back and forth. He got the takedown with just over a minute left in the round, but Poirier was up quickly. Poirier had him up against the cage and started throwing heavy shots. He put Brandao down and did it again and finished it on the ground. He was throwing punches on the ground with bad intentions.

Winner: Dustin Poirier by way of 1st round TKO

Jim Miller out jiu-jitsu’d the black belt. That was amazing. Miller suckered Camoes a bit into a false sense of security and pulled off an arm bar for the submission win.

Winner: Jim Miller by way of 1st round submission

Barnett was working for takedown and as he came in, Browne grabbed the back of his head and kneed him right in the face. Barnett went to his knees and had his arms around Browne’s legs, but he may have been out. Browne nailed him with nasty elbows and it was stopped.

They both came out punching, but Ronda is so much stronger. She took Miesha down and Miesha went for a triangle. Ronda powered out of it by picking Miesha up. Ronda was using her jab to keep Miesha within distance. Miesha got a takedown, but Ronda stuck her in a triangle. Miesha pulled her head out. Ronda got two sweet judo sweeps and Miesha took a lot of punishment. Her face is bloody. Ronda let Miesha up even though Miesha is doing just as good in the standup as Ronda is.

Ronda is whipping Miesha with throws. Miesha is defending the arm bar excellently. Ronda nearly swept her right into the mount. Back on top, Ronda nearly had her finished with punches, then went to the arm bar. Miesha fought it off and escaped. Ronda used an inverted triangle, but Miesha didn’t tap. That’s a 10-8 round for Ronda.

Ronda got another arm bar and before barely extending it, Miesha tapped. She wanted out.

Winner: Ronda Rousey by way of 3rd round submission

Weidman got the early takedown, but Silva was back up. Weidman pushed him up against the fence, landed a right and took him back down. Weidman took him down again and landed several shots, but Anderson brought him inside his guard. Weidman stayed inside his guard and was landing big elbows. Silva couldn’t keep him off. Weidman got up and dropped another big bomb on him to end the round.

Silva started throwing kicks to Weidman’s leg and he went to the ground. The fight is over. It looks like he broke his leg or ankle.

Winner: Chris Weidman by way of 2nd round TKO