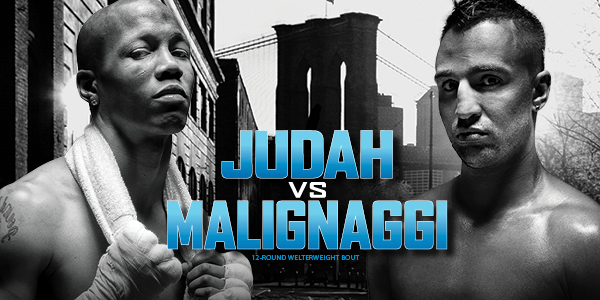 Predictions seem to be split on this one, including the one done at Bad Left Hook. Duan has Paulie winning by decision and I’m going the other way with a decision victory for Judah.

This is the beginning of two really solid weekends of boxing to end the year, with Adrien Broner vs. Marcos Maidana coming up next weekend.

Really close feel out round for round one. Thought Malignaggi was quicker to the punch and led the exchanges, but Judah did redden his face already.

Malignaggi’s glove touched the canvas so that’s an early knockdown for Judah. Malignaggi is fine. They were tangled up and then Judah landed a left that knocked Malignaggi off balanced. Both guys using their jab well.

Judah and Malignaggi butted heads early in the round. They both may also have cuts. Judah is landing the harder shots, though Malignaggi is more active. I generally score the harder punchers better even if the softer punches land more. That may dictate my scoring tonight.

Thought Paulie won the fourth. He was more active and really, Judah didn’t do much. Also landed a nice left hook. Has blood coming from his eye from the butt. Malignaggi slipped down at one point as their feet tangled.

Judah is being out-worked. Malignaggi isn’t doing anything past being a pest, but is outscoring Judah in every round except for the second.

Someone give Zab Judah a Red Bull. Malignaggi was waving jabs over and over at him and Judah didn’t do anything at all. He was working on his footwork or something.

Judah started out the round well and ended it with two nice body shots. But in between, it was all Malignaggi. Referee had to break them up for doing a bit of wrestling.

What’s weird to me is that Paulie doesn’t hit very hard at all, yet Zab is trying to avoid his shots like he’s a power puncher. He should be trying to walk him down, but it’s Paulie who is leading just about every exchange.

Funny quote from our buddy Brotherman: “I’ll bet my grandaddys watch, whoever loses is going to throw a tantrum.” At this point, it’s the only thing to look forward to.

Crowd started booing. Paulie threw his hands in the air for some reason. But really, it’s not his fault. Judah just doesn’t want to engage.

Paulie gets this round simply because of a successful jab to the face, right hand to the body combination.

Judah’s corner asked for the knockout. And yet, in the first minute, Malignaggi still threw more punches. Judah’s doing a great job making Paulie miss and answered a few jabs with left hands, but that was it. The ending was a bit weird. Judah missed a left hand and tackled Malignaggi and chased him. Malignaggi punched at him after the bell and Judah was angry. Not a great fight. I have Paulie in a wide decision.