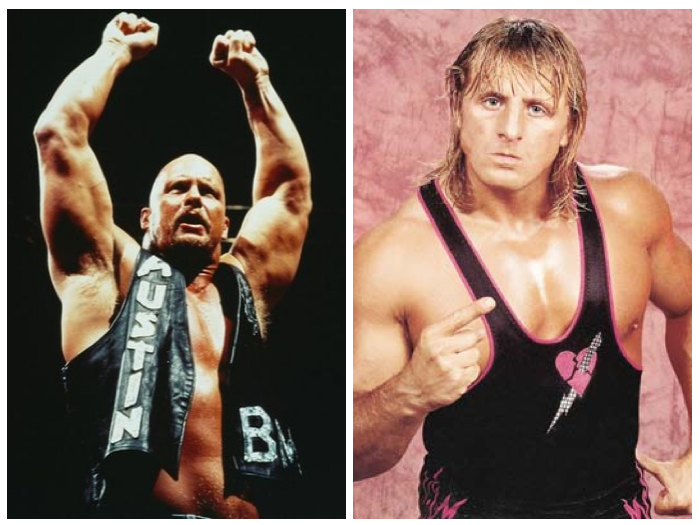 It took us quite a while to get here.

It’s the rematch of an infamous match between Stone Cold Steve Austin and Owen Hart at SummerSlam in 1997. Austin was crazy hot and was scheduled to beat Owen for the Intercontinental championship. Near the end of the match, Hart was a little sloppy with a tombstone piledriver and broke Austin’s neck. Austin eventually was able to roll Hart up like the finish called for and win the match, but anyone watching could tell that something was wrong.

The injury put a halt on Austin’s rise for a short while, but the injury was really the reason why Austin’s stay on top was so short. When he retired in 2003, it was because of complications of the neck injury that was originally caused during their match.

Owen Hart has been the underdog favorite of the tournament. He’s beat Mabel, Harley Race, and Brock Lesnar. Austin, one of the favorites coming in, beat William Regal, Randy Savage, and Bret Hart.

Because of Hart’s passing, this is a true dream match. Though it already happened, you could imagine that they could’ve had a helluva grudge feud at some point. I don’t think we ever got to see the quintessential Owen Hart vs. Stone Cold Steve Austin match.

Big D: This is a weird match for me. I wanted to see Brock vs. Stone Cold in the match that never was but WAS teased on several different occasions.

Duan: I love Stone Cold but he always wins everything.

Alan: For me one of the most fitting examples of a great feud which never got a great match (one on one at least).

Don: I missed out on the best of Owen Hart, I hate to admit.

GG: I have a bad feeling about this.

Alan: In 1997, Owen vs. Austin had all the dynamics of something special but bad timing and misfortune meant it never panned out like it could have. So in that regard, I see this as a really fitting final.

Big D: In their prime, I could see this match being awesome, even BETTER than the 97 stuff.

Duan: I don’t think there was ever a guy who got more mileage out of a King of the Ring win than Owen Hart did. The King of Harts character is what his career will be most remembered for, and for a time, it made him one of the most interesting personalities in the business and certainly the best heel.

Alan: From the perspective of who was the better King – both guys used it to elevate their career’s in a big way. They are perhaps the two best examples of using the tourney as a stepping stone. Owen played up the King aspect of it more, and that gets some brownie points from me. I LOVED the King Of Harts nickname, his logos and his gear around this time. It was great.

Big D: Work into some 2001 slapstick comedy, get serious, brawl a little bit, and then hit the high spots.

Duan: If Owen, by hook or by crook, somehow managed to scrape by a babyface Austin in the final, the heat would be absolutely insane – especially given how hot their rivalry was already.

Don: As The Brain once said, “It’s not cheating if you don’t get caught!”

Alan: As the pace quickens it’d be more about who can land the big blow. Owen would be looking for his beautiful Spinning Heel Kick or his Enzuigiri and Austin would obviously be looking for the Stunner. I’m going to say that the Owen fairytale story continues and he gets the duke with the move that brought it home for him at WrestleMania 10 – the Victory Roll. Only this time he’s delivering it rather than countering it.

Duan: I say Owen tries every shortcut and cheap trick in the book, but can never get any foothold in the match until the rest f the Hart Foundation hit ringside. Bret distracts the official, leaving Austin at a 3 on 1 disadvantage against Owen, Anvil and Davey.

Big D: I’m going to pick Owen Hart to win, and in a hint of irony (that word that I love to misuse), he wins with a really BAD looking rollup. Everybody has a laugh afterward and share beers until Austin stuns him and celebrates with the crowd and we all go home happy.

GG: With Don as our resident Canadian, he has to pick Hart. Am I the only one going with Austin? I had Owen eating 7 Stunners.

Don: However, Austin will be too much for Owen. Sure, they’ll have a great match, but Austin would find a way to kick out at 2.9 time and time again. But the match will end with Austin giving Owen the double bird, kick-wham-stunner. 1-2-3.

GG: Thank you Don! At least it wasn’t 4-1. In all seriousness, this was a lot of fun and I guess the King Of Hearts is our King Of All Kings. Congrats to Owen.