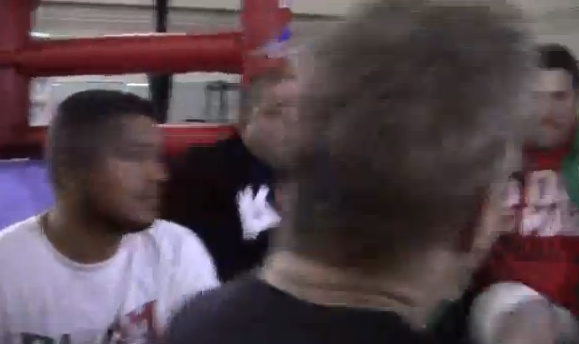 There was a near brawl in Macau earlier. And it’s not even Saturday.

Based on the stories told, Brandon Rios’ training time went over and Freddie Roach came to take over the gym. We’ve seen this on The Ultimate Fighter before. Gym time is sacred and people claim it as their own during their time.

Rios’ trainer, Robert Garcia looked to be doing an interview when Roach approached. Roach didn’t want to hear that they needed extra time and it got ugly.

Roach was aggressive with his language, using some language that might be okay in the boxing gym when you’re hanging out with fighters, but not okay when someone is shooting video. I didn’t hear a homophobic slur, but if he did use one like some have said, I take back what I said about these things being gym-speak.

But the one who looks really bad here is Manny Pacquiao’s former conditioning coach, Alex Ariza who mocks Roach’s Parkinson’s Disease. And when Roach takes a step forward, Ariza front kicks him right in the chest. I wouldn’t say Roach is the right. Maybe Ariza is just a higher degree of wrong.

Ariza and Roach have a history that dates back several years and Roach seemed happy to finally fire Ariza earlier this year.

It goes further as one of Rios’ team has to be restrained. I couldn’t tell but some have said that Roach called him a name based on his being Mexican.

Amazingly, Garcia kept his cool throughout it all. But talk about going all out to hype a fight.

Check out the full video below:

– It looks like Roach calls Garcia’s a friend a Mexican something. And Ariza drops the homophobic slur, not Roach. Ariza is heard mocking Roach’s illness more so in this video since the camera is right near him.