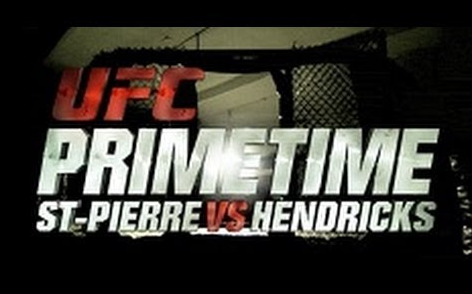 So far, this Primetime series has just been okay. However, I understand this is the best episode yet.

Here’s the UFC Primetime: St-Pierre vs. Hendricks recap for episode three (video of full episode at the bottom):

Hendricks went back to his college to wrestle and be guided by his college coach. His coach says he treats him like he’s a regular wrestler. His focus has been more on wrestling this fight than others. He usually trains with the team a few times before a fight, but has done so six times before this fight.

GSP trains with world class Muay Thai fighters who also help analyze Hendricks’ heavily left-hand dominant striking style. If Georges can make him miss, they think Hendricks will be tired after the second round.

GSP says he has to be on a mission. It’s more than just mental and physical. It means everything to him. GSP’s fear is about under-performing. He focuses on what he’s going to do to his opponent, not on his opponent.

Final thoughts:
This was definitely the strongest episode so far. Both guys came across as killers. You can see either guy coming out on top and Hendricks looks to have the mental makeup to beat GSP.