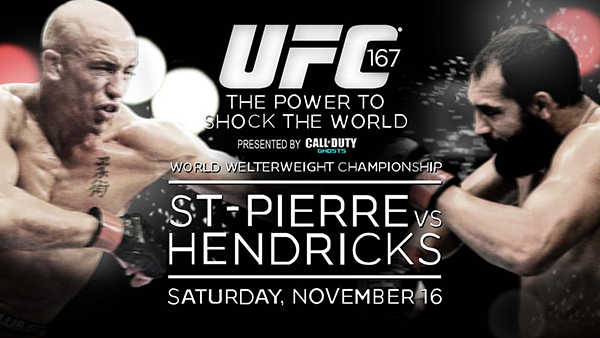 We’ve covered this one pretty extensively with our predictions column that was posted yesterday, our 20th anniversary memories column on Thursday, and the podcast I did with Jason Hagholm.

More people picked against GSP in our predictions column than at any other time I can remember.

Elliott looks a lot bigger. He sticks his face out and drops his hands and has paid for it so far. Bagautinov is countering Elliott’s movement forward.

Second round went to Elliott as he was on top of him for some of the round. Bagauntinov made it close with some nice standup.

Bagauntinov won the majority of the round with standup, though Elliott was throwing back. Elliott got a takedown and a hard knee late.

On our podcast, I said I thought Kos’s back was against the wall and he needed to go back to fighting smartly and not as recklessly. Well, that didn’t happen. Koscheck couldn’t keep him off. Woodley landed nasty shots and they caught him solidly. He had Kos down, they were stood back up, but he put him down again with a right and that was it.

Lawler tried coming in early, but MacDonald was just a small distance away and actually was able to use his front kick like one would a jab. He threw it and then countered Lawler with a right hand. Lawler throwing lots of kicks early. Lawler wasn’t exactly ruthless, which was probably good. But he tried cornering MacDonald against the cage and MacDonald blocked everything he threw. Lawler could win this round because of the number of leg kicks he landed that Rory didn’t block. Late, he tagged MacDonald, but MacDonald came back. I’d lean Lawler myself, but MacDonald was very strategic and looking like he’d figured some things out.

MacDonald picked it up a bit. He was landing his right hand and then with two minutes left, landed his takedown. MacDonald did nothing on the ground. Lawler looked like he was waiting for something and was getting bored. MacDonald transitioned into some sort of front lock as he’s cradling his leg and his head. MacDonald was back into Lawler’s guard and then half-guard before exploding with some elbows. MacDonald picks up the round, though he’s been unimpressive so far.

I had summarized a great round three, but it didn’t save for whatever reason. Lawler knocked him down twice, MacDonald got a takedown late as Lawler was tired, and tried to land elbows at the end. It was a great finish and one that should go to Lawler.

Evans pushed Sonnen right back into the cage. Evans landed a right hand and they traded shots, but nothing really landed. Evans shot in low and took him down. Evans had him pinned up against the cage while Sonnen was on his back. He landed a huge right and Sonnen tried to take cover. Evans had his back and landed shot after shot and it was stopped. Sonnen looked awful.

Winner: Rashad Evans by way of 1st round TKO

Hendricks threw an overhand left and missed and GSP took him right down. GSP went for a guillotine twice, but nothing was there. One minute into the fight and it’s a wrestling match. Hendricks landed a short uppercut as he anticipated GSP’s shot. GSP grabbed his leg, but couldn’t get it. Was taking shots to the face and elbows to the head and let the leg go. Hendricks powered him down with a takedown. Hendricks is now in control. Countered GSP with a knee to the head. Hendricks countered GSP’s leg kick with a short left that might’ve made it through GSP’s defense. It was just as good of a round for Hendricks as possible.

Hendricks is blasting him with shots. Looks like GSP misstepped which could be knee cap related. He can’t really move. Hendricks’ hands have accuracy and power. GSP’s mouth piece came out and it slowed the pace down. Hendricks is just missing the haymaker. GSP is timing Hendricks’ leg kick with a nasty jab. He’s also landing kicks. Hendricks is looking for the one shot while GSP is trying to set up combinations. This was a 10-8 round until GSP started countering Hendricks in a smart way. Hendricks still wins the round, but GSP looked better in the last two minutes or so.

Hendricks has uncanny accuracy with those knees. Had to do a ton of film work to time those knees just as Georges comes in. Interestingly enough, GSP is now dictating this round. Hendricks’ wide punches are opening him up. GSP is now landing heavy shots both punches and kicks. Hendricks was clearly the stronger man in round one, now GSP is pushing him around a bit. Every time GSP lands, Hendricks shakes it off as if it didn’t hurt him, but it’s happening way too often. Hendricks is now tired. He shot in for a weak takedown attempt. But he still got it as GSP tried to get away. I wonder if GSP tries something from the bottom. Even with the takedown, GSP wins his first round. We now have a fight.

GSP is landing a left hook that’s not devastating, but is more of a check hook. As he moves away from Hendricks’ left hand, he catches him with it. Hendricks lands a punch and their feet get tangled and GSP goes down. Hendricks is now in his guard. GSP can’t keep him off and is taking punishment. For some reason, Hendricks let him up. He landed some nice left hands. GSP needs to pick up the pace to have a shot at this round. GSP went for a shot and backed Hendricks up, but Hendricks reversed position and then GSP sprawled and put Hendricks back against the cage. Hendricks turned him back round. This is Hendricks’ round which would put him up 3-1 with GSP needing a stoppage. Great drama.

GSP with a big right hand and a takedown. Hendricks is complaining about something. GSP with a front face lock. Hendricks trades spots with GSP. Even though he’s more tired, he’s still much stronger. GSP needs to do something big here. Crowd is clearly behind GSP here. GSP missed a right hand and goes for another takedown. After about 20 seconds, GSP gets it. Hendricks back up. GSP may win this round, but on my card, Hendricks will still win the fight. GSP grabbed a kimura, but Hendricks sat down on it. I have Hendricks winning 48-47.

I think GSP retired, at least for a short while.