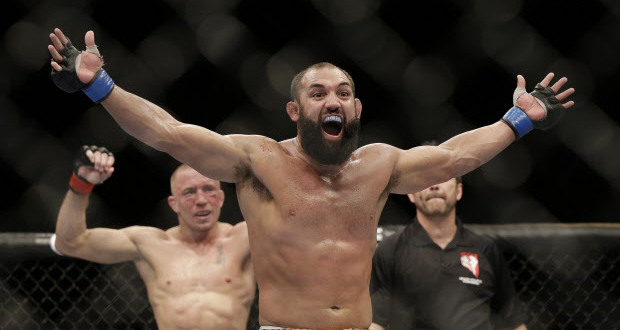 I gathered the fellas after last night’s controversial Georges St-Pierre victory over Johny Hendricks. They’ve sent me their feedback and I’m publishing it unfiltered.

Cactus Jim: I expected it was either going to be 49-46 or 48-47 Hendricks across the board. I thought the 3rd could go either way and that the 5th was GSP’s round. On my card, Hendricks clearly took 1, 2, and 4. I will go back and watch it again tomorrow, but tonight I was pretty pissed off. Ogle (Cactus Jim’s friend) sent me a text and said Hendricks got fucked and that UFC scoring was beginning to remind him of boxing. And if GSP does retire, whoever the next champ is gets fucked because everyone will say they didn’t beat the champ to win it. Hendricks got double fucked in my opinion.

Duan: I scored it 48-47 Hendricks.The fight rests on round one. Two and four were clear Hendricks rounds. Three and five were closer but belonged to GSP. The first round was the only one which is really open to interpretation, but for me Hendricks should have done enough to seal it.

I knew before the final cards were read that it was going to be a split, and I was nearly as certain the judges would go for St-Pierre. When you have a close round like that, especially if it’s early in the bout, there is always going to be a certain percentage of officials who will favour the name guy. It’s like they start on autopilot and they have to be convinced to move off it. The b-side will very rarely get the benefit of the doubt in a opener that’s close. I have seen the same scenario play out countless times, and I think that’s what we got here to.

I don’t think it was a judging travesty. This wasn’t Pacquiao/Bradley, but I do feel they raised the hand of the wrong guy. St-Pierre doesn’t look like the same fighter he was, and I do believe Hendricks, at least on this night, had his number. I disagree with Jim though, in that I do feel if GSP is to move on, Hendricks will be accepted as a credible champion. The situation reminds me of when Lennox Lewis retired after scraping by Vitali Klitschko all those years ago. That night I think most people felt that the writing was on the wall for Lewis, and his successor had been found in the big man from Ukraine. That’s the way people feel now about GSP and Hendricks.

Big D: Here’s the deal – Round 1 is UNDENIABLY a round that goes to Hendricks. He popped GSP many times in the jaw AND hit him with three elbows to the face, cutting him open. GSP mounted a little bit of a comeback, but at the end of the round, he was more hurt than Hendricks. To me, there is no debate. He should’ve pushed the issue in round 5 just a bit more and it would’ve done it!

GG: After discussing the fight with the fellas, I still feel like Hendricks won the fight. But there were two opportunities that Hendricks never capitalized on that I think would’ve put the fight away for him easily. Before I get to that, I wanted to say that round one was for Hendricks on my card, but it wasn’t a clear round, like two was. It was like 55/45 for Hendricks. I did think it was a great start, but I’m not sure about D’s claim of it being UNDENIABLY for Hendricks.

In the second round, referee Mario Yamasaki stopped the fight after GSP lost his mouth piece. I thought it was a bad time to stop the fight. But when it was restarted, Hendricks didn’t immediately pounce on GSP. Had he, I think he could’ve finished him off. Maybe he was tired. And this is the exact spot in the fight where GSP found his bearings and dug down.

In the fourth round, Hendricks was on top of GSP and nailed him with shot after shot. GSP looked dead in the water and for whatever reason, Hendricks just let him up. Why? He could’ve finished him there. Was he worried about a submission from the bottom? Worried about getting tired?