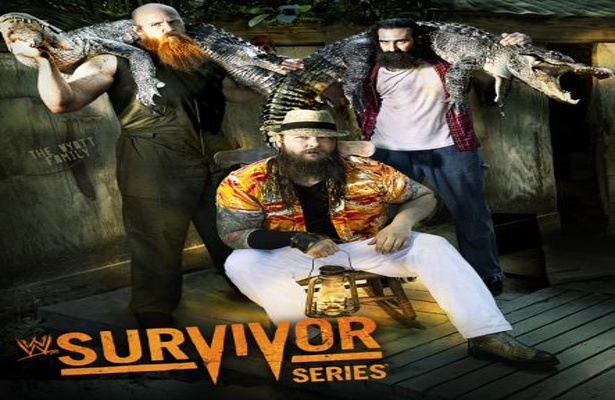 If you missed it, check out our posts here, here, and here which cover some of our favorite Survivor Series moments.

1. The Miz Vs Kofi Kingston

The Miz turned heel on Raw last week in case you didn’t watch. Kofi turned Miz’s Skull Crushing Finale into a front cradle, but Miz reversed it and turned it into his own cradle for the win. Miz shook his head aggressively while holding the pin. Is that supposed to help?

Winner: The Miz by pinfall

The Miz went to shake Kofi’s hand and got a slap. Who’s the heel?

Triple H and Stephanie McMahon came out and said there’d be no interference all night and that the first match will be the five-on-five elimination match.

2. Rey Mysterio, The Usos, Goldust, and Cody Rhodes Vs The Real Americans and The Shield

Surprise first elimination – Dean Ambrose was working with Cody Rhodes and was arguing with the ref. Cody rolled him up quickly for the first pinfall. I have a feeling we aren’t done with Dean tonight.

The next elimination was the Usos hitting the super kick and splash off the top rope on Jack Swagger. Antonio Cesaro and Goldust work really good together.

After giant swings to both twin Usos, Cody pinned Cesaro with a sunset flip. We could be seeing many eliminations at the hand of Roman Reigns.

Reigns spears Jimmy for the pin. Cody hit Seth Rollins with the Cross Rhodes, but Rollins tagged in Reigns who speared him for the pin.

Rollins stomped Jey’s head into the mat for another pinfall and it’s now 2-2. Rey and Goldust on one side and Reigns and Rollins on the other.

Rey was tossed out of the ring and had to beat the 10 count back in. Reigns went for the spear and hit post. Rey rolled up Rollins for the pin. It’s Goldust and Rey vs. Reigns.

Reigns speared Goldust and Mysterio for pins. Star-making performance for him, though he needs more than one move.

Steph talked down to Randy Orton. Triple H tried to get him to take care of business.

Match was a Raw match, but still decent. Axel looked better than usual, though this was all about Big E. Big E hit the Big Ending for the win.

Rene Young was in the ring with Big E and he set the cheap pop record.

AJ did the reverse Vince Lombardi in trying to get her team to be upset at the Total Divas.

Naomi channeled her inner RVD and hit a split-legged moonsault on Alicia for pin one. Cameron ate the bottom turnbuckle and Rosa Mendez pinned her. Then Nikki quickly pinned Rosa after the X Factor. Nikki then pinned Summer after a dance contest. Kaitlyn pinned Eva Marie. Kaitlyn then pinned Naomi. Brie pinned Kaitlyn with a drop kick off the top rope. Aksana pinned Brie after a spinebuster. Nikki pinned Aksana with a back breaker of sorts. Tamina roughed up JoJo so AJ could pin her. Natalya made Tamina tap out and we’re down to AJ vs. Natalya.

Natalya made AJ tap out to the sharp shooter. Nikki made sure Tamina couldn’t interfere.

Ryback came out and issued an open challenge. Mark Henry looking like Rick Ross came out.

And Ryback’s open challenge was answered. Henry jumped into a big splash as Ryback was coming toward him. Then he hit the World’s Strongest Slam for the win.

No elbow brace for Cena as he says he doesn’t think about it if he doesn’t see the brace.

Well, at least it was a great match. Del Rio wanted to win so badly and was wondering what else he could do to beat him. He had on the arm bar late, but Cena got out with the powerbomb spot.

The thing I hated most about this match is you could tell when the kick outs were coming. Both Cena and Del Rio are bad at giving away the kick out by looking directly at the referee. Can’t you save that for right after the two count?

Cena won with the Attitude Adjustment, per usual. His act is stale, not only because his character is stale, but no one thinks he’s losing. He needs to take a page out of Hogan and Rock’s book when it comes to selling.

7. CM Punk and Daniel Bryan Vs The Wyatt Family

It was as good of a match as you’d expect, but more so reminiscent of a Raw main event with time. Luke Harper works well with these guys and at least Rowan is big and can throw guys around. The best spot was a powerbomb from the top by Harper on Bryan. Rowan then tossed Punk over the top rope in a standing position.

Bryan hit the knee on Rowan and Punk hit a sloppy GTS on Harper for the pin.

Bray teased coming in, but didn’t. He was angry.

8. The Big Show Vs Randy Orton

Match sucked. Triple H’s music played as Show was going to attack Orton in the ring. Triple H, Steph, and Libertarian Kane came out. Show hesitated and then ate a RKO. All the brow beating was simply to get Orton back into the evil guy who punted folks. He punted Big Show for the pin.

Cena came out so they could do the dueling belt raising. Orton’s paranoid because he thinks Triple H and Stephanie are looking for replacements. Paranoid Randy Orton!