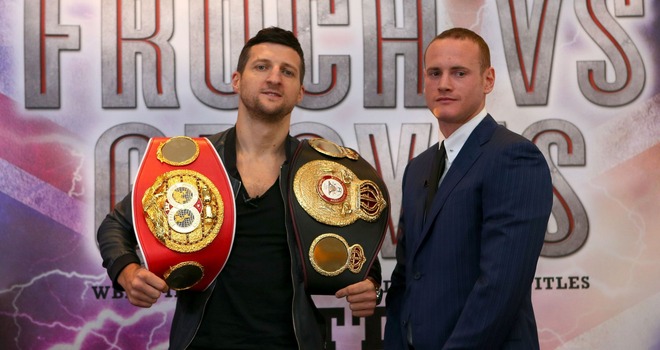 Thank you AWE TV! If not for the great Wealth TV streaming service, I wouldn’t be able to watch King Carl take on George Groves.

It’s a fight that Duan and I talked about last night on FGB Radio and one that Duan has been keeping me aware of since it was signed.

I’ll be adding Duan’s round by round scoring.

Round started slow, but ended amazingly. Groves won the early jab battle and then hit Froch with a right hand on the button. Froch came back with a right of his own. And then Groves put him on the canvas after Froch threw punches on his back foot with a left-right combo. Groves’ round and it’s 10-8.

Froch is still casual with how he’s keeping his hands up. Groves landed a nice left, but that may have woken Froch up as Froch came back with a nice multi-punch combination that stopped Groves in his tracks. But Groves is still coming. There may be more knock downs in this one. Still think Groves did more to win the round.

Groves won the early parts of the round. He’s making things uncomfortable for Froch. It’s an awkward fight in that it doesn’t look like a dance at all. When Froch zigs, Groves zags. Froch picked things up later in the round and had Groves against the ropes, but he covered well. Groves’ round again, but Carl’s best so far.

The round was fairly toned down until Groves landed another big right hand. Whenever Froch stats something, Groves holds on and it’s frustrating Froch, who hit off the break near the end of the round. Groves in a shutout so far.

Froch’s punches are very wide. Groves’ head movement is better and his shots are shorter and straighter. This was a close round, but I still think Groves did enough to get it.

This is the best round in the fight so far. Groves crushed Froch with a right hand and I thought he was going down again, but he hung in there, ate a lot of shots and waited for Groves to tire before unleashing some big shots of his own. This is Groves’ round, but both guys took big shots.

What’s weird about this fight to me is that Froch is putting himself in weird places where he’s getting hit and his body is turned around. Froch rallied late, but it’s still Groves’ round.

Froch had Groves in the corner and to counter Groves grabbing him, he pushed his elbow right above Groves’ collarbone. He was warned for it. He’s trying to make the fight a bit tougher and rugged. He also kept his distance much better, trying to set up his right hand. This is the first round I’m giving to Froch.

Unbelievable. Froch rocked Groves and Groves was trying to get his legs. Froch was doing everything to get to him; pushing, running at him, and all kitchen sink stuff. Froch hit him and Groves covered up and didn’t seem to know where he was in the ring and the referee immediately stopped it. We very well could’ve been well on the way for Froch to break him down, but it was way early. Froch gets a bit of a gift there.

Winner: Carl Froch by way of 9th round TKO