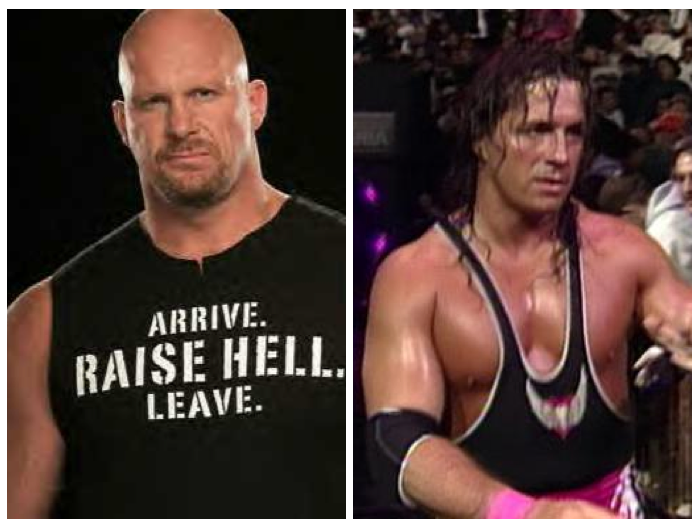 Well, after Owen Hart’s upset over Brock Lesnar in the first semi-final match, could Bret Hart make it an all-Hart final?

Alan: One of the greatest rivalries in WWF history.

Big D: These two have proven to have classics each and every time they work and this time – it should be no different.

Don: Didn’t I call a Hart brother’s final? However, to go against myself, I’m going to pick Austin over Bret.

Duan: I think it’s time for Steve to get his win back.

GG: Agreed about Austin. If what we have heard is true and it was Bret Hart who was going to drop the belt to Austin originally at WrestleMania XIV, that would’ve been an all-time classic.

Big D: It’s pretty amazing that unlike Steamboat/Flair who worked 1000 times in the 70s then had classics in the 80s, these guys had amazing chemistry from the FIRST time they met.

Alan: Bret had Austin’s number throughout the feud, with Steve never getting a one on one victory over “The Hitman”. Both guys won the King Of The Ring in impressive fashion, but neither put much emphasis on the “royalty” aspect of it. They just went about their business like a couple of good pros.

Don: This is a match where Austin could go in as the underdog. There’s some kind of psychological thing going on where, no matter what, he can’t beat Bret. He knows it, and Bret knows it. And then we have Owen gloating over his win, and looking to take on either man. Then again, he may be a little hesitant to get in the ring with Austin again. So retribution can be had all along.

Duan: I would use the same layout as WrestleMania 13 with Bret taking 90% of the match, working him over and wearing him down, but never being able to put him away. Austin as always will never quit.

GG: With or without Ken Shamrock? Just kidding.

Alan: While Austin’s KOTR ring had more lasting impact in terms of what it lead to, I think Bret’s is more fondly remembered. At least for me, King Of The Ring 1993 was a special event in my childhood. After having to suffer through the Hogan ending of WrestleMania IX, I needed something to rejuvenate my wrestling love. KOTR did that with Hogan jobbing out on the undercard, and Bret ending the night as the main man. His performance that night was incredible, and for that I give him the win here.

Don: During the match Austin could make some mental errors, and be totally un-Austin-like. He’s not sure of himself. He looks lost. Something’s wrong. And then Bret goes on the attack. Austin plays Ricky Steamboat for a bit, looking like Cena did when he returned from injury against Del Rio.

Duan: They tease the idea of him passing out again or the ref calling it, but Stone Cold fights off the sharpshooter again and again. Bret lets his frustration boil over, grabs a chair to finish the job, huge swing and a miss, Austin ducks under and turns him into a stunner for the 1-2-3.

Don: Bret gets cocky. He gets thrown into the ropes. Austin tries a back body drop, but Bret kicks him in the gut. A light goes on in his head and he decides to be a dick and hit Austin with a STONE COLD stunner. Austin kicks out at 2.9999 and hillbilly’s up. All of a sudden he’s back, and Bret is in trouble. We go through the motions of their Mania match where Bret has him in the sharpshooter. Austin doesn’t tap, but bites his wrist to prevent himself from passing out. He somehow makes it to the ropes this time. Bret picks him up lackadaisically and Austin KICKSTUNNERBAM’s him.

GG: Very interesting at how Duan and Don both used the main part of their WrestleMania 13 finish as part of the booking. I like it!

Big D: Make this no disqualification and have Austin finally go over and put this ghost behind him.

GG: Well, it looks like Austin wins 4-1 here. It will not be an all-Hart final. Instead, it’s a rematch of a match that went array in 1997 – Stone Cold Steve Austin vs. Owen Hart. 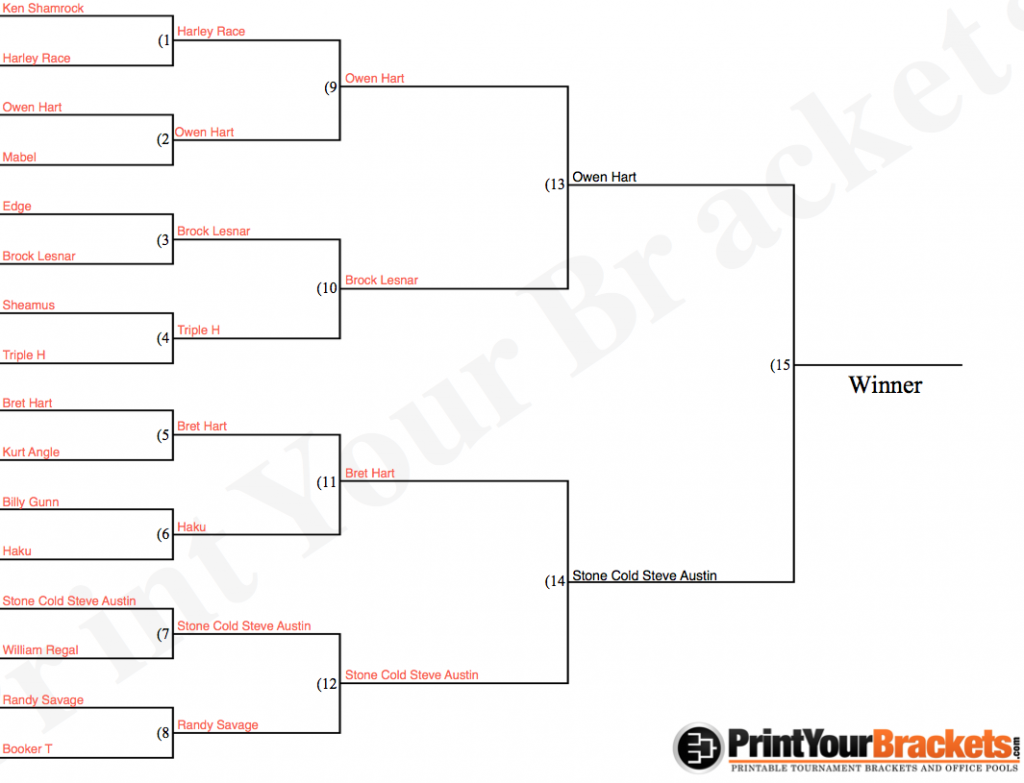