I didn’t like episode one very much. While Junior tried, neither guy really dislikes each other and both personalities are pretty bland.

Cain earned his black belt in jiu-jitsu at AKA and on the same day, Daniel Cormier earned is brown belt. Cain talked about his family and specifically his daughter as inspiration.

While Junior Dos Santos is the better boxer, he’s working a lot on his ground game, including possibly using more jiu-jitsu if the fight does go back to the ground like in the second fight. 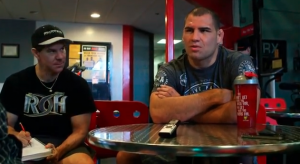 There’s really not much going on when it comes to hyping the fight, but they show Cain as a hard trainer and someone who is always dinged up. Junior has a massage therapist.

In a small segment that shows the media strains on Cain, there’s a two second glimpse of Dave Meltzer in a ROH shirt.

Junior’s coach thinks Junior lost the second fight because he wasn’t mentally all there. He says that Cain can’t take a punch as shown by the first fight. He couldn’t put Junior away in the second fight. If it was Junior punishing Cain like Cain did, Cain would’ve quit. And they continually say that Cain hits like a girl. It’s kind of interesting because there was a GIF of the destruction of Junior’s face throughout that fight that was quite telling.

Thoughts: They created a little more buzz thanks to Junior’s coaches, but the reason I’m excited to watch this fight isn’t because Junior’s coaches are trying to let Junior know why he’s better. It’s because both of these guys are bad ass fighters. I hope the next episode shows just that.