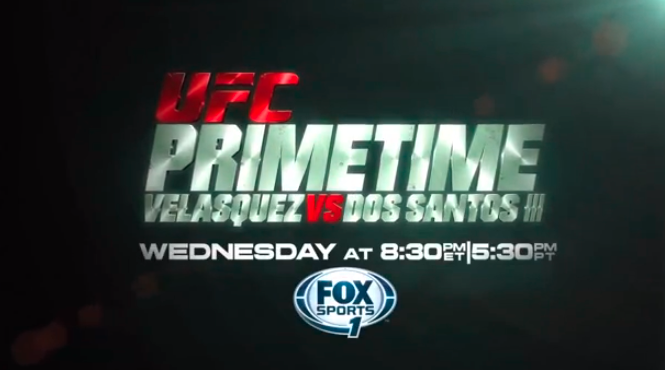 The UFC Primetime series has been hit or miss. It’s not nearly as compelling as All Access or 24/7. It doesn’t have the glitz, glamour, or story telling. This one may also not have the compelling main character.

Here’s the UFC Primetime: Velasquez vs. Dos Santos recap for episode one:

In the intro to the show, Junior Dos Santos said that Cain Velasquez couldn’t finish him. And he stopped Cain in the first round. They need to find out who is number one.

The show starts with Cain at the weigh-ins for the Floyd Mayweather vs. Canelo Alvarez fight. They show how big he is with Mexican fans in what was a heavy Mexican crowd. He looked to be popular, but those were mostly Canelo fans.

Dos Santos expects to finish Cain and doesn’t believe Cain can do what he did in fight two again. He has an issue with his blood that his coaches think was because of being overtrained for their second fight. He’s taken his training to a whole new level in what very much looks like a NFL training facility. And he’s bigger than he’s ever been. He’s a bit bigger in the chest, but his shoulders are humongous.

Daniel Cormier fights on the undercard and when he’s done with his fight against Roy Nelson, he’ll get back to corner Cain. Cain doesn’t feel right without him in the corner. They also spar three times a week to push each other.

Junior says that Cain hits like a girl. Junior’s definitely trying to play the heel here. It’s not working yet.

Thoughts: All Access and 24/7 this is not. There are compelling things about both fighters, but for whatever reason, none of that comes out. The only thing of interest to me is Junior’s physique. There will definitely be questions about it, especially if he wins this fight.