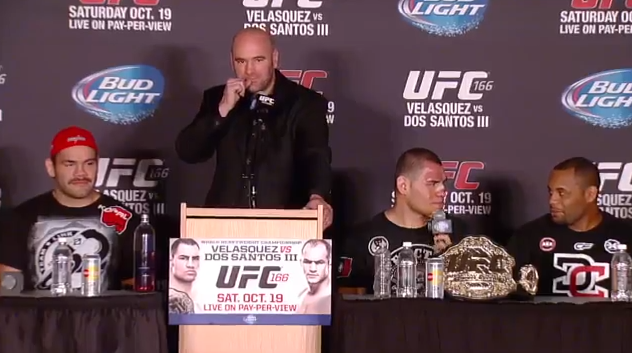 On November 5, a history of the UFC documentary will air on FS1. Dana says there will be footage on the early owners who people think of as the bad guys.

On Monday, October 28, they will start a 20-day UFC 167 20th anniversary tour that starts in Denver. You can read more about it on MMA Fight Corner.

Cormier says he wants in the mix and he can ask for a title shot at light heavyweight and Dana can just tell him no. But he can still ask.

Diego, when asked if he’s taking too much punishment, says he was built for it. He also thinks Gilbert is the number 1 lightweight in the UFC.

Dana said in his 13 years, he’s never seen a fight like Gilbert vs. Diego.

He thinks that the heavyweight title fight should’ve been stopped in the third. Cain needs to go home and rest before they book his next title defense against Fabricio Werdum. Dana says Super Bowl weekend would be great for him, but that’s not decided.

Cain didn’t think the fight should’ve been stopped since it wasn’t.

Dana says he’ll try to squeeze Hector Lombard onto the Australia card, even though Joe Silva thinks it’s too stacked.

Dana says Gilbert is back in the mix for the title shot and it was good for Gilbert that Pettis won. Gilbert says he can beat Pettis and Punk.

Dana says they will go to Mexico at some point and there will also be an Ultimate Fighter there too.

Dana says he likes Hector Lombard at 170 and doesn’t want him to bounce back and forth.